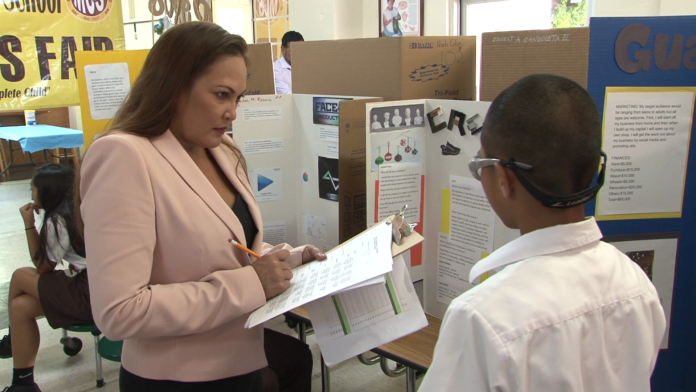 The students were tasked with coming up with business ideas and presenting those ideas to a panel of judges. There were over 100 participants and business proposals ranging from sports camps to dessert shops, t-shirt brands to photography services, a gymnastics gym to a shoe store, a pet sitting and grooming service and even a tuk tuk riding service.

“Grades six, seven and eight come together and they put on a business plan and show the judges their businesses, from profits, their idea to costs and they even brought samples to show,” said MCS teacher Erica Guilliot.

Each student put their well-researched ideas on display which gave a summary of the business plan and then presented those ideas to demonstrate how or why it could be a profitable business.

MCS Alumni and Endowment Foundation Chairperson Attorney Mike Phillips says the goal is to foster growth and engender interest in the business industry at an early age and hopefully maintain that interest into adulthood.

In fact, Phillips says in the three years the Al Ysrael School of Business has been around, many students have expressed their desire to bring their ideas to fruition once they’re ready. One student who joined the fair is seeing to it that it happens.

“One of the ideas he had here, he said he’s still going for it and he said it’s kind of, I wouldn’t say it’s changed his career path, but it kind of fueled it and he’s kind of rooted in his faith that yes this can work. He was telling me, yes I’m gonna do that,” Phillips explained.

Phillips says the business fair and the school of business would not have been possible without the generous support of prominent businessman and politician, the late Al Ysrael.