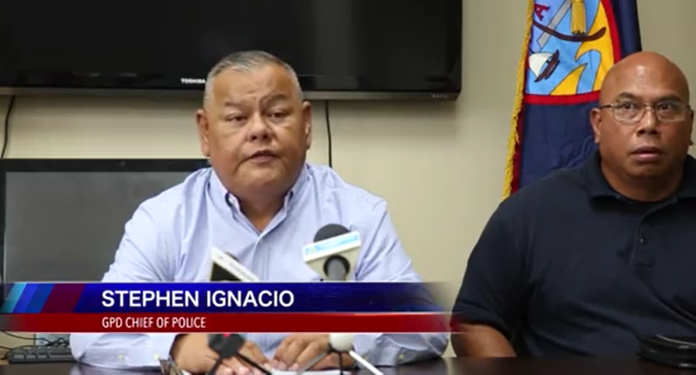 The Guam Police Department is working to combat the recent rise in crime.

During a press conference held earlier today, GPD said that they have arrested three individuals responsible for the recent robberies across multiple Mom and Pop stores along with Gas Stations across the island.

PNC’s Don Sulat has the report.

Guam experienced a total of 7 robberies over the past couple of weeks. Robberies are fueled by methamphetamine.

Stephen Ignacio, Police Chief of the Guam Police Department said, “Whether they’re doing this because they have an addiction to meth or they need to support a drug habit, you know, it’s no secret that we have a problem that we’re trying to address.”

Bob Jessy Quinata, Javick Chutaro, Brandon Flores, and Seifor Kachura were arrested in relation to the robberies of several gas stations and small stores across the island.

It started with the arrest of Bob Quinata. Who confessed to a robbery of a small store in Hagat. Through his confession, he gave up the identity of another suspect involved in several other theft cases.

That other suspect was Brandon Flores.

The Winster II Gameroom, the 88 Gameroom, and 3 Mom and Pop stores reported they were robbed by an armed individual.

Police then followed a car linked to the robberies and located the suspect, Javick Chutaro. Police discovered that the handgun on him was used in other robberies.

The handgun was later identified to be an airsoft gun.

The driver of the suspect vehicle was the wanted Brandon Flores. In the backseat of the car was Seifor Kachura.

Police found about $1,400 dollars worth of methamphetamine in the vehicle.

All 4 men are repeat offenders for similar crimes related to robbery and possession of a controlled substance among other charges.

The Police Chief also addressed the recent rise in crime saying, “We have seen an uptick but also we have seen a very fast response from the investigations of Guam Police Department.”

He assures that GPD is working to combat the rise in crimes.

And that next month, they expect more officers to join the force.

Ignacio said, “We have a cycle that’s going to be starting in October.

He added”We have the retirees coming on board the first week of October as well.”

All men have been booked and confined and their cases have been forwarded to the Attorney General’s Office for Prosecution.