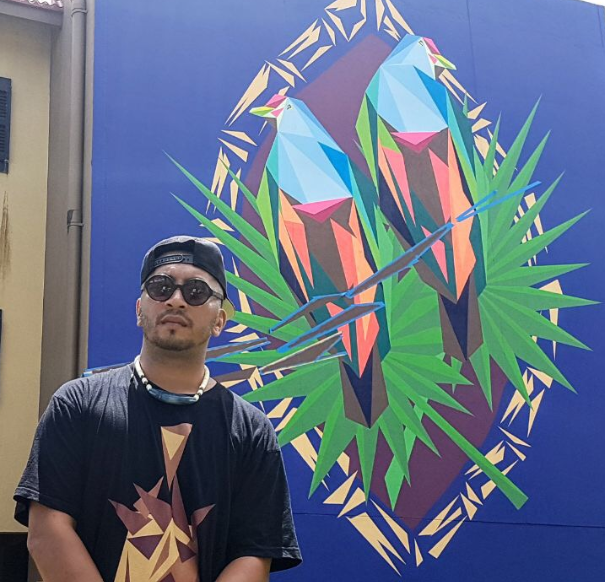 Artists from around the world have descended to Guam to take part in the 2017 POW!WOW! GUAM –an art collaboration with the Guam Art Exhibit.

Guam – It’s difficult to miss the bright and bold murals that have been popping up all over the island.

Artists from around the world have descended to Guam to take part in the 2017 POW!WOW! GUAM –an art collaboration with the Guam Art Exhibit.

For Guam’s inaugural festival, five artists were selected for the event.

We met up with Naturel, a visual artist based in DC with Chamorro roots. He’s spent the last four days toiling on a mural in the heart of Agana.

And for these artists, their work is on a much grander scale. Large floor-to-ceiling murals have transformed regular buildings into giant canvases.

POW!WOW! originated in Hawaii and has since sparked a worldwide mural festival celebrated everywhere from Long Beach to Israel. Their website explains that “Pow!” refers to the impact that art has on the viewer, while the “Wow!” serves as the reaction that art has on the person.

For artists like Naturel, his striking artwork serves as more than a fixture, but doubles as a conversation starter.

“I wanted to do something that spoke to the peril of the wildlife here,” he explained. [My mural] is the Marianas Fruit Dove. I think it’s locally called the Totot. Upon learning about the bird, it was really colorful and I felt that was really indicative of the culture here,” he said.

Naturel says he hopes this mural begins a crucial dialogue about our fragile environment.

“There’s I think 14 birds that were on the island and half of them were unique to the island and are no longer here. And this is one of them,” he said.

Although Naturel says he’s looking forward to contributing to the art scene here, he encourages emerging artists to maintain the rich art and culture already here on Guam.

“I’m Chamorro 100%, but I was born off the island and raised in the east code in America. So, it’s been tremendous getting to know my heritage and especially coming back as a cognizant adult and being able to embrace the culture and learn a lot about myself. It’s been totally awakening,” he said.