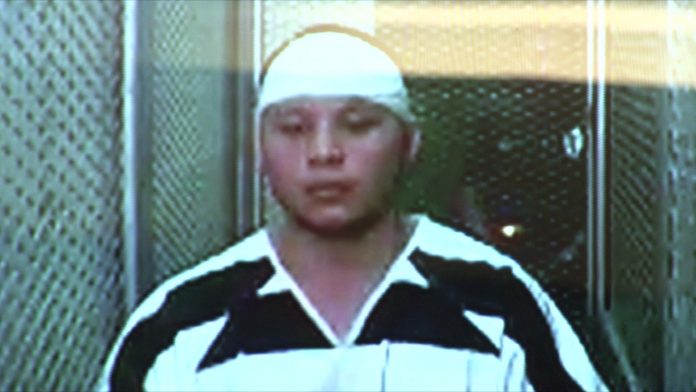 Guam – Keith Jermane Garrido appeared in court today to go over details for his upcoming trial. He appeared, through video conference with his head bandaged up. Concerned, Judge Anita Sukola asked about it as it appeared to be from an injury. This was Garrido’s response.

Sukola: “I see, Mr. Hattori, that Mr. Garrido has a bandage on his head.”

Hattori: “Oh, yes, your honor. He is receiving treatment for that.”

Sukola: “Can you hear mine?”

Garrido is charged with the murder of Nancy Mafnas during a home invasion back in November 2012. Judge Sukola noted that she was ready to move forward with trial, but Defense Attorney Stephen Hattori said that he was still missing some evidence before he could file all the documents for trial such as his witness list and proposed jury instructions. Judge Sukola gave Hattori until tomorrow to file everything. On Monday, they are to return to go over last minute details before setting trial. Judge Sukola also said that co-defendants in another case have entered plea deals and agreed to testify against Garrido.

“Please advise your client one more thing, that the co-actor with Keith Garrido in the [other case] Kurtis Garrido has pled guilty and I want him to know that all others had pled guilty and they will be testifying against him … which would trail the first matter,” Sukola announced.

Meanwhile, Department of Corrections Spokesman Jeff Limo says that Garrido is now receiving treatment for HIV. Garrido’s attorney had previously revealed that Garrido was not being treated for the nearly two years he was being held in detention. At the time, Garrido had noted that DOC had refused to treat him because he had not yet been convicted. But Judge Alberto Tolentino issued an order requiring DOC to treat Garrido even if he’s only a detainee.