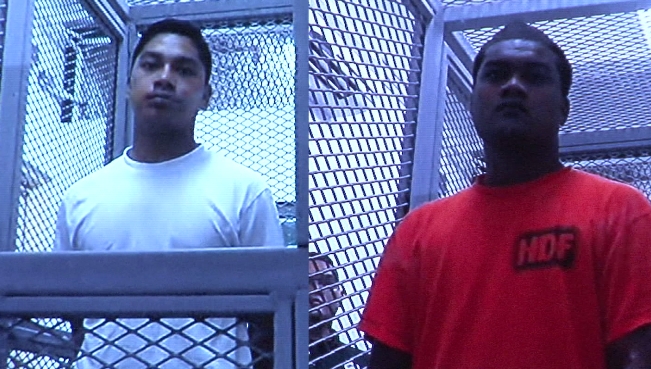 The report says Gilbert Alvarez Jr. pleaded for his life.

Guam – In his final hours, Gilbert Alvarez Jr. was being a good Samaritan, giving two strangers a ride when they turned on him and beat him to death, even as he pled for his life.

Mallo Sally and A-last Simiron were arrested yesterday in connection with the death of a man, identified as 43-year-old Gilbert Alvarez Jr., who was found by a jogger near the University of Guam last week.

Chief Medical Examiner Dr. Aurelio Espinola ruled the death a homicide. Espinola says Alvarez died of a skull fracture, and believes he was beaten with a blunt object.

According to a magistrate report, Sally and Simiron appeared drunk when they were picked up by a friend after crashing their truck near Andersen Air Force Base. Simiron told police that they were dropped in the Mangilao area, when they noticed Alvarez in the Mangilao baseball field and asked him for a ride.

In Alvarez’s vehicle, Sally and Simiron spoke to each other in another language and planned to steal the vehicle. The report states that Sally started to punch Alvarez’s head while Alvarez grabbed a metal pipe from beneath his seat to try to defend himself. Simiron placed Alvarez in a chokehold while Sally took the pipe and started beating him in the face. Alvarez was reported to be on the ground, gasping for air and pleading for them to help. They ignored his pleas, the report states, and when Alvarez became motionless, they fled the scene with the vehicle and crashed it in Yigo.

The suspects appeared via video conference call at the Northern Court Satellite in Dededo this afternoon, before Magistrate Judge Alberto Tolentino.

Sally and Simiron were charged with aggravated murder, manslaughter, robbery, aggravated assault, and theft of a motor vehicle, all as felonies. Assistant Attorney General Sean Brown recommended a $250,000 cash bail for each of the suspects due to the serious nature of the crime.

“This is a case where it appears that the suspects in the case, the defendants charged, planned the attack,” Brown said. “They actually accomplished the theft of his motor vehicle using extreme violence and a deadly weapon. And instead of helping the victim get to medical assistance, they left him to expire on that road alone.”

Both Sally and Simiron will remain incarcerated until they can make bail. Judge Tolentino advised them that they may ask for a change or reduction of bail if they cannot make bail in 24 hours. They were instructed not to have contact with each other, the Alvarez family, or any of the witnesses.

50 Under 40: Emerging Leaders in the Government of Guam announced

Guam Archbishop on Pope comments regarding same-sex unions: ‘It does NOT alter Church teaching’