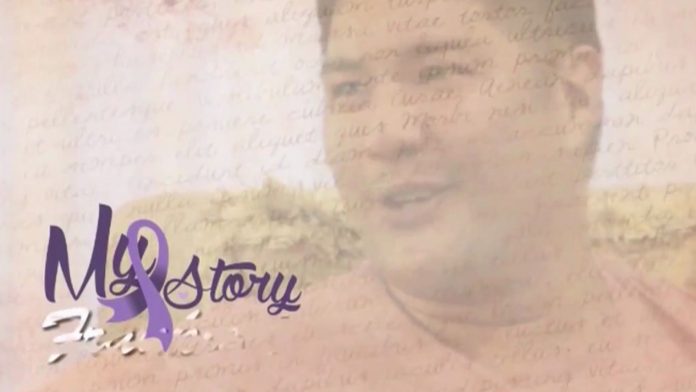 Frankie Perez was diagnosed with colon cancer in 2014.

Guam – We continue with our reunion series of My Story, a Sorensen Media Group TV show that shares the stories of cancer warriors, survivors, caregivers and stakeholders.

When Frankie Perez appeared on My Story last year, he was just about finishing up with chemotherapy. We caught up with him to find out how he’s doing.

“The chemo drugs I was taking, the side effects was numb hands and feet. My hands and feet have generally improved, but it’s a slow process. Every day I just try and stimulate them,” explains Perez.

Perez was diagnosed with colon cancer in late 2014. He had surgery to remove a tumor and underwent about six months of chemotherapy.

“The protocol for colon cancer is the first year, it’s every three months, blood work, scans, things like that. Every time the tests come out clear then they can start spreading it out,” he says.

Some good news for our cancer warrior.

“My tests have been coming out clear so now I’m in my second year, we’re starting to spread out the blood work and the scans. Now I don’t have to get a colonoscopy for another two years,” he says.

In just a few more years, Perez will reach another milestone of being in remission.

He talks about what’s helped him get through the last year.

“A lot of prayer, you know, a lot of family support,” Perez explains. “It’s real humnbling. I thank everybody, my family, my girlfriend, my friends. Positivity just really plays a big role. If you’re a caregiver, if you know somebody who has cancer, small words of positivity help out a lot, goes a long way.”

We will continue to feature cancer warriors on our show but don’t forget to tune in next Monday, May 30 for our one year episode of My Story. The how begins at 6 pm on FOX 6.