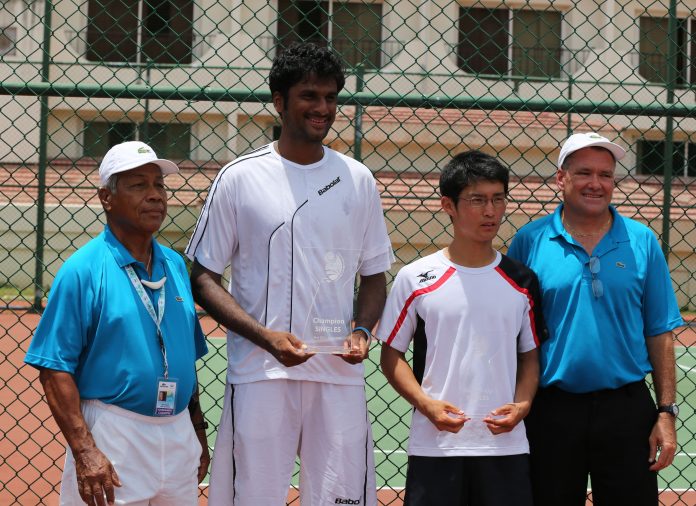 Tumon, Guam – One of the quickest matches in the 2013 Lacoste GVB Futures tennis tournament happened to also be the singles final Sunday morning at the Hilton Guam Resort & Spa.

“I think it was my drive to succeed that got me this far and to win in the final,” Myneni, 25, said after the match. “My coaching staff really pushed me to be healthy and ready for play, and also motivated me to do well.

“The tournament in Guam was outstanding. There was a lot of support from everyone involved and from the fans who came to watch games. In some other tournaments I’ve played in, you don’t really see a lot of people – it can seem so lonely. But here, though my coaches aren’t here anymore, the people here have still made me feel at home,” the former Alabama Crimson Tide tennis standout added.

Guam is the last leg of Myneni’s travels before he takes a short break to prepare for higher-level Challenger tournaments. The early part of 2013 brought him to places like California, Arkansas and Oklahoma in the United States, Thailand, and India before heading to Guam. Of the nine Futures tournaments he’s played, he won four – two in India, last month’s Thailand F2 Futures and the Lacoste GVB Futures in Guam. He currently is ranked No. 302 in the world in the Emirates ATP rankings, updated most recently on May 27, the ATP Web site states.

Shiga, the only unseeded player to make it through to the quarterfinals, had a tough draw, facing No. 3 Junn Mitsuhashi in Round 2, No. 8 Woong-Sun Jun of Korea in the quarterfinals and No. 5 Yuichi Ito in the semifinals. Shiga’s steady baseline game seemed to be his weapon against his earlier, higher-ranked opponents, but it just wasn’t working against Myneni. Myneni’s strong serves and tough shot placements visibly frustrated the generally cool and composed Shiga, who in one instance received a warning for racket abuse. Despite the losing score, fans who followed Shiga’s run to the final continuously exclaimed “Ganbatte!” after points and on changeovers.

Shiga’s lone game in the match came midway through the second set with him trailing 0-3. A pair of service return errors and forehand errors by Myneni conceded the game to Shiga. Unfazed by the dropped game, Myneni continued to pressure Shiga and recorded four aces in the next three games. At triple match point in the seventh game, Myneni powered in an ace to seal the win.

Although Myneni won the singles event of the tournament, other winners also included Guam’s youth tennis players who enjoyed an impromptu tennis clinic with the champion following his match and awards ceremony. The young athletes engaged in hitting drills and learned some serving tips from Myneni, India’s current No. 2-ranked player behind Somdev Kishore Devvarman.

The tournament’s updated drawsheets with all results from the week are available for viewing or download from facebook.com/GuamFutures. Updates are also available by following @GuamFutures on Twitter.