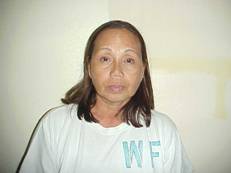 Guam – 56 year old Myrna Castro Evans has been charged with trying to hire someone to murder her husband.

GPD Spokesman Officer A.J. Balajadia says Evans was arrested by Dededo Precinct Officers last night about 10:30pm. She has been booked and confined on charges of Solicitation for Murder, Terrorizing and Family Violence.

The husband had recently taken out a $300,000 life insurance policy,  and the couple has been married for 28 years, according to a release from Officer Balajadia.

READ the Magistrate report for Evans HERE (scroll down, 6th one down)

According to the Magistrate complaint, Evans approached one of her husband’s employees and asked him how much he knew about poisons. And then the employee claims, she said “‘I want you to kill my husband'”.  The employee said Evans offered him “land, money and an FJ Cruiser in exchange for killing her husband.”

The employee said he told Evans that he agreed to do it, but then he went to his employer, Evans’ husband, and told him what had happened.

The husband asked his employee to meet with his wife again and “continue to pretend that he was going to carry out the murder”, but this time he asked the employee to record the conversation.

The employee and Evans met again on Wednesday of this week and, the Magistrate report states, he “secretly recorded the conversation with his cellular phone.” And again, she asked him about poisoning her husband and he told her he would poison him that evening.

The husband took the tape recording and filed a complaint with police yesterday.  Officers then went to the woman’s home and asked her to come to the precinct “relative to an ongoing investigation”. The report says that her immediate relply was “‘Is my husband OK?'”

On further questioning Evans “admitted that she asked the employee about obtaining poison” saying her intent was “to kill him and herself with the poison”.

Ms. Evans is accused of soliciting someone to murder her husband of 28 years.  Her husband recently took out a $300,000.00 life insurance policy.