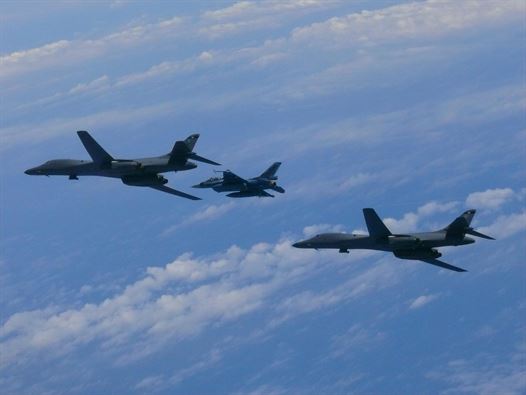 B-1B bombers flew out of Andersen Air Force Base Thursday to join South Korea in military exercises near the Korean peninsula.

Guam – North Korea has once again condemned recent military exercises near the Korean peninsula, accusing the United State of igniting a “nuclear war.”

“The gangster-like U.S. imperialists are ceaselessly resorting to their frantic nuclear threat and blackmail to stifle the DPRK with nukes at any cost,” a statement read on the state-run KCNA website.

The hermit kingdom was referring to B-1B bombers that flew out of Andersen Air Force Base Thursday to join two South Korean F-16 fighter jets for military drills near the Korean peninsula.

North Korea referred to the exercise as a “surprise nuclear strike drill targeting the DPRK,” pointing the finger at the U.S. for “aggravating the situation.”

“The reality clearly shows that the gangster-like U.S. imperialists are the very one who is aggravating the situation of the Korean peninsula and seeking to ignite a nuclear war. The U.S. imperialists are making last-ditch efforts to check dynamic advance of the DPRK by deploying their nuclear strategic assets in succession, but its army and people and people are never frightened at such moves,” North Korea said.

The joint exercise was planned, CNN reports, citing Air Force spokesperson Capt. Candice Dillitte, and “not in response to any current event.”

However, the drills come ahead of a 10-day trip to Asia President Trump will embark on this month. The president will be making a stop to Hawaii first where he will meet with Alaska Gov. Bill Walker and the leaders of Pacific U.S. territories such as Guam, CNMI and American Samoa.

The president’s 10-day trip will bring him to five countries, beginning in Japan, then to South Korea, China, Vietnam and the Philippines where he will also participate in the ASEAN summit.