A photo taken last Tuesday and posted on NASA’s website shows a volcanic plume blowing westward from the summit of North Pagan Volcano. According to the write up on the NASA website, the plume’s blue tint suggests the presence of sulfur dioxide.

It is not unusual for the North Pagan volcano to intermittently emit plumes of steam mixed with volcanic gases like sulfur dioxide and some ash. It has been doing that on and off for the past 3 years. However, according to the NASA posting, since the middle of last year Pagan’s activity has been nearly continuous.

This latest image of Pagan was taken on May 7th, 2012 by the MODIS instrument on the Terra satellite.

Satellites provide the most reliable observations of  Pagan. The island has been uninhabited since a major eruption forced residents to leave in 1981.

The image below is older, but shows a closer view of Pagan.  It was taken January 11, 2007 by the International Space Station.

Pagan actually is made up of 2 volcanoes connected by a narrow isthmus. However almost all of the historical eruptions of Pagan dating back to the 17th century, have originated from the North Pagan volcano. 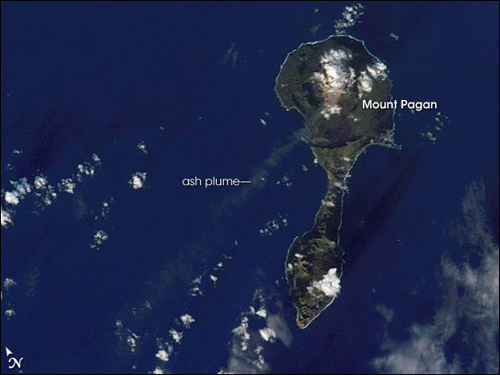