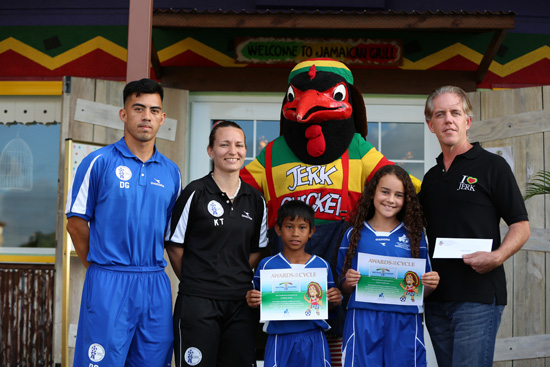 Guam – Isabella Rodriguez and Jonathan Sevilla were recently selected as Jamaican Grill Guam Football Association 2012 National Academy Girls and Boys Player of the Cycle, respectively, and received their awards at a recognition ceremony at the Jamaican Grill Dededo location.

Rodriguez and Sevilla, selected by program directors and coaches, each received award certificates and Jamaican Grill dining certificates to acknowledge their individual achievements in the elite program. Also recognized was coach Brett Maluwelmeng, voted as the Jamaican Grill Guam Football Association 2012 National Academy Coach of the Cycle. New players and coaches will be recognized at the conclusion of each of the four program cycles in one year.

As part of the educational portion of the program, Lindsey Adams and Jennifer Johnson have joined as official tutors for the 2013 National Academy.

The first cycle of the 2013 GFA National Academy begins Tuesday.