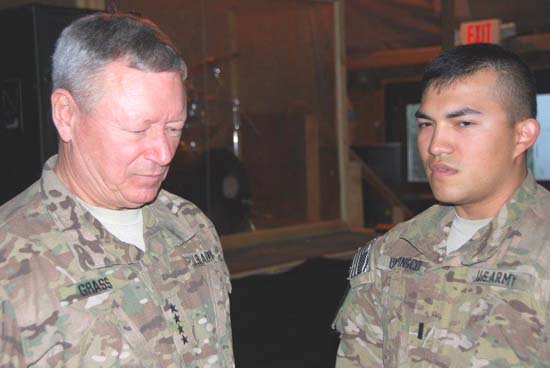 During his brief stopover at Camp Phoenix, Grass, NGB’s 27th commander and member of the Joint Chiefs of Staff, dined with approximately 200 National Guardsmen from Guam, Alabama, South Carolina, Indiana and Michigan. The four-star general serves as a direct military advisor to President Obama, Secretary of Defense Charles “Chuck” Hagel and the National Security Council. But Grass also has a piece of Guam in his heart as he explained during his brief stopover.

“One of the unique things I saw when I first visited the Guam National Guard (in Djibouti, Africa) in 2004, when I visited them in this base camp, it was about meal time,” Grass said. “They said, ‘sir, let’s walk over here.’ We went into the huge barbecue area. When they were off duty, they would go into the Red Sea and catch fresh fish. They would cook, and they would cook for everybody in that camp; Active, Guard or Reserve, contractor or civilian.”

Grass addressed all National Guardsmen this day, pointing out his current mission was to send a message of thanks from home for the sacrifices endured in Afghanistan.

“Across the board, everyone truly appreciates your service in a way I cannot express,” Grass told his audience. “I need to pass this to you because doing what you do today, whether it’s here in Afghanistan or deployed at home to a natural disaster, that’s what makes the National Guard so strong today. People see what you do. They see you leave your jobs and your homes.”

At Camp Eggers, the general awarded Charlie Company’s Sgt. James J. Gumabon with his four-star coin. Gumabon was selected by his peers and leaders as one of the few exceptional Soldiers in the unit.

“He was nominated by Charlie Company for his exceptional service and outstanding leadership in support of our mission here in Afghanistan,” said Charlie Company commander Capt. John Salas.

Lt. Col. Michael Tougher, Task Force Guam commander, queried Grass during a question-and-answer session. Tougher inquired about a Hawaii warrior transition unit, a military treatment center, that’s slated for downsizing. Given Guam’s upcoming redeployment, Tougher expressed how vital this WTU could be to Guam. Grass redirected this to one of his staff, who resolved to look into the issue.

In preparation for Task Force Guam’s return home, the general offered his advice:

“As you get ready to redeploy, the key is taking care of each other and (talking to one another). When someone has a problem, help him out,” said Grass. “Respect each other, but know each other very well. We don’t know a lot of times what war does to people. As they return back to home, and as they try to get back into the day-to-day functions, things will be different back with mom or dad or your spouse. Things will be different at your employment. So we have to look out for each other. And if we have a problem, reach out for help.”

The general has served as NGB chief since September 2012. He commands the 54 National Guards and is responsible for more than 470,000 Army and Air National Guardsmen. That’s almost a half-million part-time service members who commit to the nation’s defense as well as home-front assistance in natural disasters.

“Let me say thanks to the Guam National Guard for your great response here but also in the homeland,” Grass concluded. “Whether it’s an earthquake or typhoon, you’re always ready 24-7.”