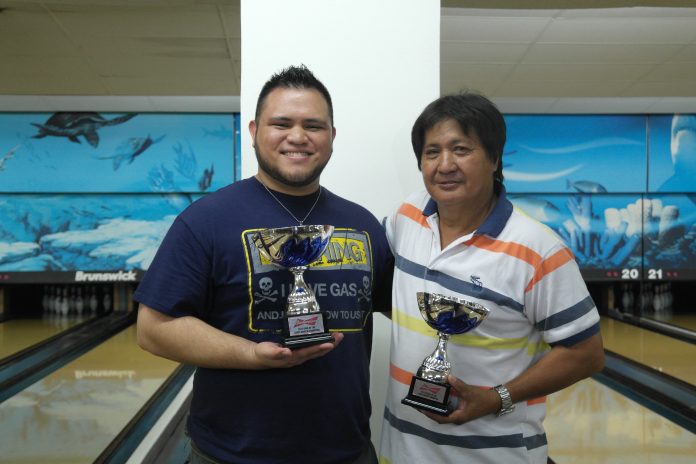 Tamuning, Guam- Timothy Nauta made short work of the King of the Lanes opponents as he rode on the heels of his top seed post to his first victory of the 2013 Budweiser monthly tournament.  Nauta took full advantage of a first frame miss by his opponent and continued his striking streak in the monthly finals to deny Joey Miranda III his second title of the year with a 234-182 drubbing of the January titlist.

Nauta’s road to the finals included getting past Keith Guerrero in the semi-final match as both competitors jockeyed for position until an open on the ninth frame by Guerrero provided Nauta breathing room for a 189-174 win.  Miranda enjoyed a comfortable lead throughout his semi-final match against second seed Ricky Duenas as the latter was unable to spare during the course of the match and fell 203-155.

The quarter final match provided the drama reel as 3rd seed Jay Leon Guerrero fell victim to a pin ten leave in the second ball of the last frame.  4th seed Miranda held on to win the match with a strike in the fill frame 224-223.  Keith Guerrero outclassed Manny Tagle with neither bowler being able to take control of the match that saw the lead change hands in several occasions until the ninth frame where Guerrero found his range to beat Tagle 172-140.

Jhun Viray erased an 11 pin handicap advantage from top seed Paul Kaneshiro in the finals of the Budweiser Prince of the Lanes monthly tournament to claim his first title of the year 161+15 to 147+26.  Viray controlled the tempo of the game throughout the match but only led by a slim margin, nursing the lead from the onset to edge the younger foe by three pins.

Kaneshiro survived a close match against Maddison Willis in the semi-final with a 151+26 to 157+18 victory against the 6th seed while 4th seed Viray eliminated 2nd seed Jared Gutierrez 226+15 to 192+25 to set up the month finals.