Military members, dependents, families and DOD civilian employees on island donated more than 21,000 pounds of non-perishable food items to Guam’s local charitable organizations including Kamalen Karidat and the Salvation Army shelters during the campaign from June 1 to Aug. 28.

Religious Programs Specialist 1st Class Yegor Kasatkin said he was glad to participate in the annual event and give his part to the local community to help those in need.

“It’s definitely a pleasure to be part of this initiative,” he said. “I am not the only one who did this; I would not be able to succeed without the help all of the armed forces and the tenant commands that supported us.”

Kasatkin added that programs such as Feds Feed Families allow local communities to see how the military helps not only protect our nation but to nourish it as well.

“It reflects good on the Navy,” he said. “It is the force for good.”
Kamalen Karidat General Manager Deacon Frank Tenorio accepted the donation from the servicemembers and said he was very grateful for the generous contribution from the DOD community. 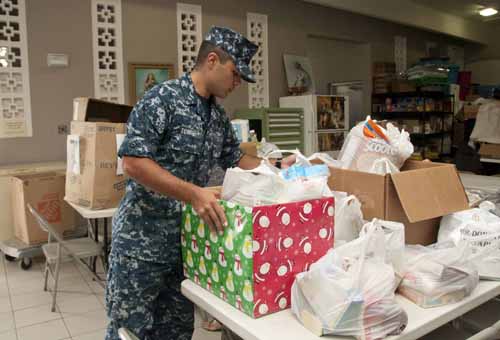 “The military are so kind in coming in voluntarily,” he said. “They could do other things after their working hours. They are doing a lot of things for the island on their off time so we’re very thankful for the military’s action in caring.”

Tenorio added that since the food kitchen opened more than 10 years ago, the military has been a great contributor to the organization donating food, supplies and even their time to serve dinner at the facility.

“When the military (is) doing this they find some commonness with the local community,” he said. “It shows the reality…as if the military is not isolating themselves from us.”

The annual Feds Feeds Families campaign is a voluntary effort undertaken by federal employees to bring non-perishable food items to their offices for distribution to local food banks. In 2012, the federal government totaled 7.3 million pounds of food items.