Barrigada, Guam – (May 13) – Sailors from U.S. Naval Base Guam (NBG) Security showcased their capabilities to the local community during the Guam Police Department’s (GPD) Static Display Law Enforcement Carnival at the Tiyan soccer field in Barrigada May 13.

The event was held in celebration of Police Week by giving the community an opportunity to learn more about the men and women working in law enforcement around the island.

“It’s a good thing to help the kids out and let them see what we do in the Navy,” said Master-at-Arms 1st Class Isiah Douglas. “In order for the Navy to really complete our mission, we need to work hand and hand with local agencies and law enforcement.”

NBG Security displayed their assets by having attendees climb aboard a four-wheel all-terrain vehicle and a 36-foot harbor patrol boat. Sailors also demonstrated their training by showing control tactics with handcuffs, submission tactics with a baton as well as an obedience drill and detection drill by the military working dogs unit.

Representatives from other law enforcement organizations such as the Guam Probation Office, GPD Special Weapons and Tactics, Guam Homeland Security, FBI and U.S. Marshals Service participated in the event. 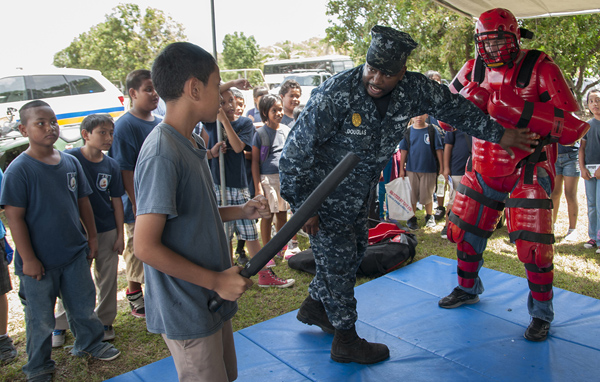 Babauta estimated more than 2,000 students from Guam’s elementary and middle schools attended the event for an up-close look at the static displays and personnel. He added that it was important to have both local and military law enforcement involved because of their close relationship.
“We get to showcase what we have and what we do every day of our lives as law enforcement officers,” he said. “Each of our divisions kind of has an attachment to these federal agencies. It is a good working effort.” 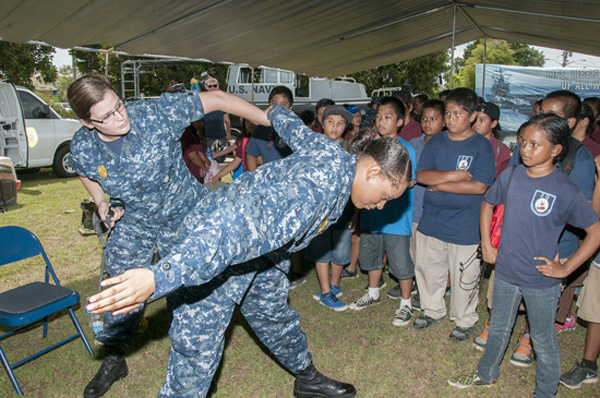