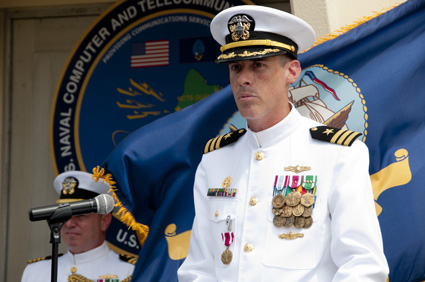 Scovill then presented Augelli with the Meritorious Service Medal for displaying inspirational leadership, resourcefulness and dedication. After receiving his award, Augelli thanked his crew for their support during his tour.

“The list of accomplishments mentioned in the award citation a few minutes ago are properly yours,” Augelli said. “You a have thrived when conditions were excellent and when times got tough. You have accomplished much in the last two years.”

Augelli reminisced about the activities he and his family enjoyed on Guam and will miss; and encouraged the Lyons family to take advantage of their tour on island.

“My family has enjoyed Guam to the fullest,” he said. “We’ve made good friends and enjoyed living in a wonderful neighborhood. Certainly, we will carry warm memories of Guam with us for the rest of our lives.”

After the reading of official orders, Lyons took the stand and thanked NCTS Guam staff for their warm welcome and said he looks forward to his tour.

“The performance and state of readiness of the command is truly impressive and I’m honored to take the reins from an officer of the highest competence and character,” he said. “As the Navy continues to blaze new trails in information dominance it is my distinct honor and privilege to be leading you in that effort while sustaining our superior communications services and cyber readiness.”

During Augelli’s tour, NCTS Guam achieved and maintained a steady 99.9 percent reliability in global and satellite paths to more than 30 tenant commands on Guam afloat, undersea and in the air.

NCTS Guam achieved the first in-port high-speed pier connection for USS George Washington (CVN 73), which enabled the ship to download necessary data and upgrades while in port on Guam; the first time the forward-deployed carrier was able to perform such tasks outside of Japan.