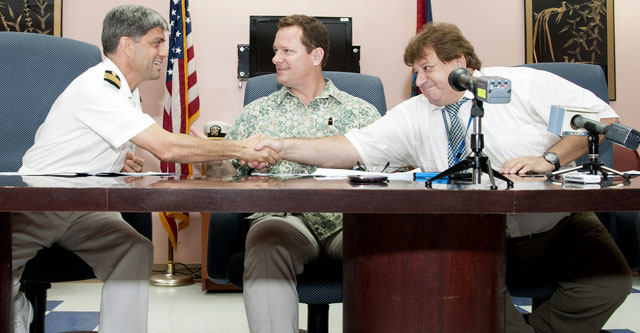 Tamuning, Guam – (May 8) – U.S. Naval Hospital (USNH) Guam and the Guam Memorial Hospital held a joint press conference to announce the Navy’s donation of an estimated $2 million of select equipment to the local health care facility in Tamuning May 8.

The transfer included radiology equipment such as a CT scanner system, nuclear medicine system, fluoroscopic system and about 1,200 other line items.

“Guam is a part of the United States,” said USNH Guam Commanding Officer Capt. Jeffrey Plummer. “We enjoy a relationship the military and the community like none other (than) I’ve seen in 27 years. There is great value in having the strategic importance of this location strengthened by relationships like this. It’s as simple as that.”

Plummer added that one of the reasons it was important for the Navy to help out the local community is to increase mission readiness.

“Navy medicine is in the readiness business,” he said. “On this island one of the things we also recognize, and it’s very unique to Naval Hospital Guam alone, is in somewhat of an isolated community we have a responsibility beyond that training and readiness and that’s in emergency response, and that’s in training in contingencies that would occur in the community.”

According to Plummer the donation took about a year to plan and process through the Defense Reutilization Marketing Office process, with the support of Joint Region Marianas.

GMH Chief Executive Officer Joseph Verga said the donation will allow the facility to conduct more diagnostic procedures and added the various items can also be used as backup equipment in the event of an emergency.

“This will be a wonderful addition and benefit to not only GMH but ultimately for the people of Guam, and ultimately enable us to establish those new services here at the hospital that we’ve been unable to offer,” he said.

Verga estimated the donation saved GMH about $2 million as the items would have cost $4 million if they were bought new.

Lt. Governor of Guam Ray Tenorio also participated in the conference and thanked the Navy for assisting to raise the quality-of-life for all residents.

“We’ve built a strong relationship in the Government of Guam with the Navy, with our civilian counterparts, with private providers because we recognize that we can’t all do it ourselves,” he said. “We’re a very close island and it makes sense for us all to be part of that mentality of a joint region because in truth Northern Marianas and all the Pacific territories and states to the south of us come to Guam.”