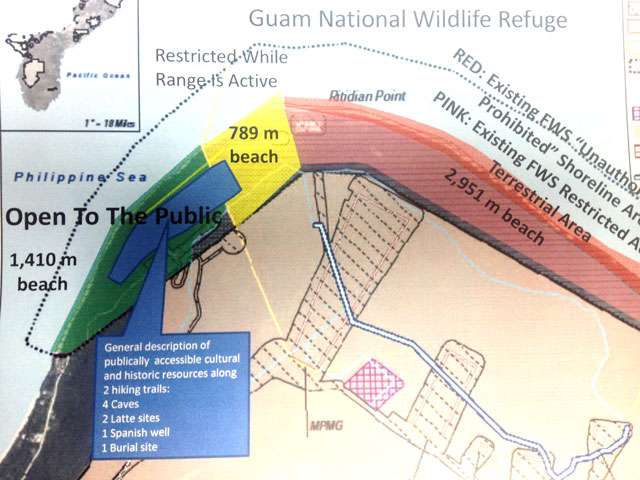 The $78 million contract was awarded to Black Construction and should be completed by November of 2020.

Guam – A major linchpin for the Guam military buildup is almost in place. NAVFAC Pacific has awarded the contract for the construction of a live-fire training range complex at the Northwest field on Andersen Air Force base.

A crucial component for the relocation of U.S. Marines from Okinawa, Japan to Guam will soon be in place. NAVFAC Pacific has awarded a $78 million-dollar contract to Black Construction for the design and construction of the live-fire training range complex at the Northwest field on Andersen Air Force base.

“The contract is one part. There’s really gonna be two projects in the live fire training range complex and the contract that we’re reading about today takes care of most of that development so its gonna take care of some administration buildings up there, some range towers, a radio, some surface radar sites, camera sites, also some ranges themselves. Most importantly kind of rehabilitation and repaving of route three alpha or Rt. 3a,” said Major Patrick.

Last week, NAVFAC Pacific awarded a contract for the construction of infrastructure for the future marine base at NCTS in the village of Finegayan. Both the marine cantonment and training range projects are set to be completed in 2020. The first marines are expected to begin arriving on Guam in installments by the mid 2020’s.

The live-fire training range complex will be comprised of four live-fire training ranges. These ranges will be above the Ritidian Wildlife Refuge which is the home to some ancient Chamoru villages and latte sites. Some groups like Prutehi Litekyan or Save Ritidian have openly opposed the construction of this firing range because it will adversely impact these sites and restrict public access to them.

“At the end of the day we realize that we are going to have some impact and that’s why we go through all these measures. We put lots of funds, lots of resources to mitigating the risks that have been identified. So, that right there is at the top of the list to identify these risks and listen to public concerns and really focus on okay what do we need to do to find the best balance between the national security mission or security in the area or region and just risk mitigation in the community, cultural resources and natural environment,” said Major Patrick.

Biological monitor Christiana-Jo Quinata says that out of the 700 acres that have been set aside for the firing range only 315 acres will be cleared. “315 acres is the actual construction footprint and then 89 of those acres is the native limestone forest that we’re clearing. But with that one of our conservation measures is to fence off this area,” said Quinata adding, “Approximately 300 acres is going to be protected from ungulates so we put up an ungulate fence. Deer and pig fence to keep them out and then also we eradicate them within to allow the native vegetation to come back,” said Quinata.

This project directly supports the plan to relocate Marines to Guam which has been 12 years in the making.  This is the second contract awarded since the Department of the Navy (DoN) completed final regulatory requirements this past July.

“Following extensive work to meet the Department of Defense (DoD) mission, while focusing on responsible use of natural resources and protection of cultural resources, the Marine Corps is pleased to see this contract awarded,” said Col. Brent Bien, Officer in Charge, Marine Corps Activity Guam. “We are committed to Guam, and our forward presence here will play an essential role in strengthening the military’s ability to maintain regional security and protect the nation’s interests in the Pacific.”

This project will provide training facilities and live fire ranges. The work to be performed provides for the design and construction of a complex of four live-fire training ranges and supporting structures. The supporting structures include a range maintenance building, administration building, area distribution node with radio frequency communication tower, two surface radar/camera sites, and a new entry gate facility into the complex. This project also provides for the rehabilitation and widening of Route 3A from Potts Junction to the Entry Control Point of the range complex.

Work will be performed on Yigo, Guam and is expected to be completed by November 2020. This contract was competitively procured via the Navy Electronic Commerce Online website, with 11 proposals received.