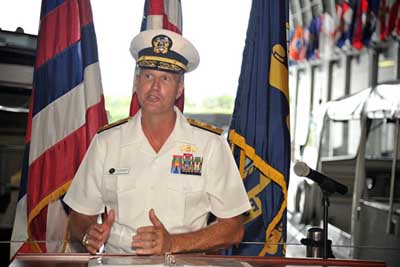 A promotion ceremony to commemorate his achievement was held at the U.S. Pacific Fleet (PACFLT) boathouse on Joint Base Pearl Harbor-Hickam, where Adm. Cecil D. Haney, commander of the Pacific Fleet, served as the presiding officer and administered the oath of office.

“Rear Adm. Muilenburg is an outstanding leader who has an immense amount of operational experience, NAVFAC facilities experience and he’s terrific with people,” Haney said. “It’s been my honor to participate in this special ceremony for both him and his family.”

Family and friends joined Muilenburg to witness this significant milestone in his career as a naval officer.

“It is an honor and privilege to have each of you in attendance today,” said Muilenburg.  “My professional successes are a result of the support that I have received over the years from many of you.  I am humbled by your enduring dedication and loyalty, and grateful for your contributions towards the mission of our Navy.”

Muilenburg assumed responsibilities as NAVFAC Pacific commander and PACFLT civil engineer on May 14. He previously served with Commander, Pacific Fleet (COMPACFLT) as a staff member; chief of staff for Commander, Navy Region Hawaii (CNRH), and commanding officer of NAVFAC Hawaii.

Muilenburg is a qualified Seabee Combat Warfare (SCW) Officer and his operational tours of duty include assignments with Naval Mobile Construction Battalions (NMCB) 62, 133 and 7, along with the 30th Naval Construction Regiment (NCR). Prior to reporting to PACFLT in 2012, Muilenburg served as commodore, 30th NCR; commander, Task Force Forager and theater engineers for International Security Assistance Force (ISAF) Joint Command in Afghanistan.

Muilenburg is a registered professional engineer in Virginia and a member of the Defense Acquisition Corps.

Guests joined Muilenburg and his family for a brief reception following the ceremony at the boathouse.