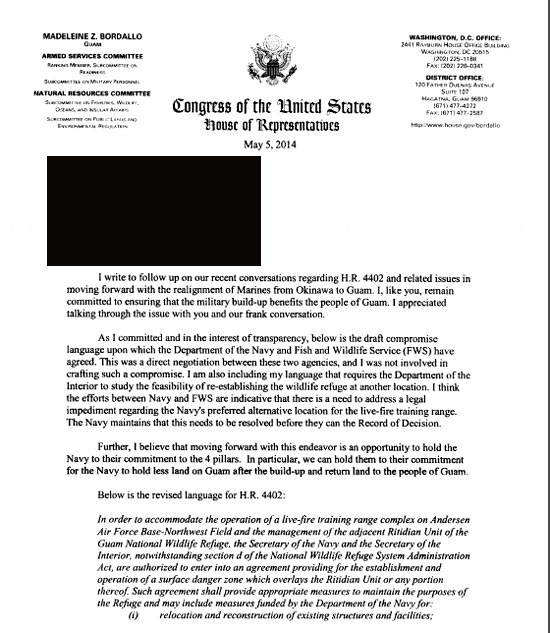 Guam – Guam Congresswoman Madeleine Bordallo says the Navy and the Fish and Wildlife Service have agreed on “draft compromise language” for H.R. 4402.

That is the bill she introduced in Congress authorizing a “Surface Danger Zone” [SDZ] over the Ritidian Wildlife Refuge to accommodate the Navy’s choice of  Northwest Field as its preferred location for a firing range complex.

In a letter sent today (Tuesday, May 6) to each of Guam’s 15 Senators, Bordallo says the compromise language is the result of  “direct negotiation between these two agencies” and she was “not involved in crafting” the compromise. [see the letter below].

The key change involves an agreement to study the possibility of moving the wildlife refugee to another location, outside of the proposed SDZ.

“Report Required – the Secretary af Interior shall provide a report to the House Natural Resources Committee and Senate Committee on Energy and Natural Resources within one year after the enactment of this bill on the feasibility of re-locating or re-establishing a wildlife refuge to an alternate location in the area of the current refuge.”

Bordallo says she believes that moving forward on this compromise language “is an opportunity to hold the Navy to their commitment to the 4 pillars.”

In particular she writes “We can hold them to their commitment for the Navy to hold less land on Guam after the build-up, and return land to the people of Guam.”

In order to accommodate the operation of a live-fire training range complex on Andersen Air Force Base-Northwest Field and the management of  the adjacent Ritidian Unit of the Guam National Wildlife Refuge, the Secretary of the Navy and the Secretary of the Interior, notwithstanding section “d”  of the National Wildlife Refuge System Administration Act, are authorized to enter into an agreement providing for the establishment and operation of a surface danger zone which overlays the Ritidian Unit or any portion thereof. Such agreement shall provide appropriate measures to maintain the purposes of the Refuge and may include measures funded by the Department of the Navy for:

(i) relocation and reconstruction of existing structures and.facilities;

(ii) mitigation of impacts to wildlife species present on the Refuge or to be reintroduced in the future in accordance with applicable laws;

(iii) Department of Defense personnel to undertake conservation activities within the Ritidian Unit normally performed by Department of the Interior personnel, including maintaining the habitat and fence and the implementation of the brown tree snake eradication program; and

(iv) openings and closures of the area to the public as may be necessary.”

Report Required – the Secretary af Interior shall provide a report to the House Natural Resources Committee and Senate Committee on Energy and Natural Resources within one year after the enactment of this bill on the feasibility of re-locating or re-establishing a wildlife refuge to an alternate location in the area of the current refuge.”

The Congresswoman asks  Guam Senators to provide “feedback and any concerns” they may have “with the revised language by the close of business on Tuesday May 6 … Guam time.”.

She apologies for the short notice, but explains “this language is intended as placeholder language in the FYl5 NDAA, we are rapidly approaching the mark-up of that bill this Wednesday.” 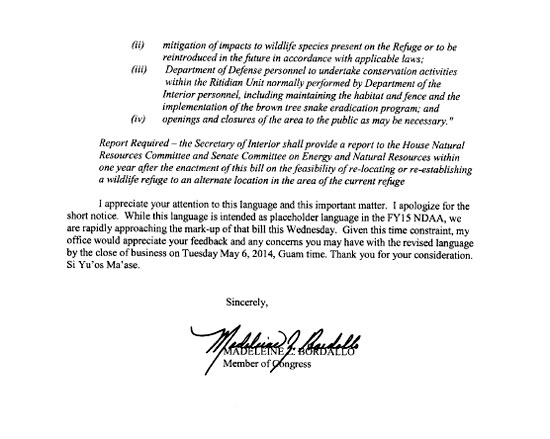