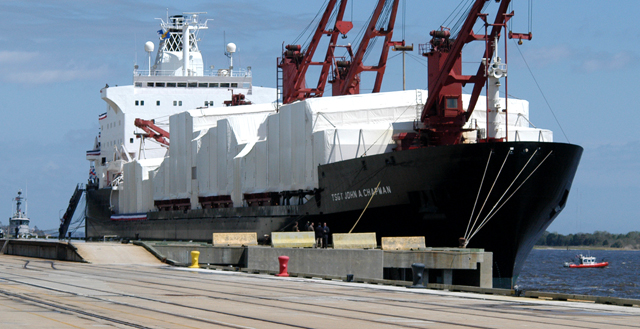 The “Chapman” is a Buffalo Soldier-class container ship which is part of the Military Sealift Command’s seventeen container and roll-on/roll-off ships.  It is one of  the 36 ships in the Prepositioning Program.

Responders from U.S. Coast Guard Sector Guam, U.S. Naval Base Guam port operations and DZSP 21 LLC, which is the Navy’s base operations support contractor, responded immediately to assess the situation and begin recovery efforts. The cleanup was completed the same day.

This incident is unrelated to the Daiki Maru, which is the Japanese commercial fishing vessel that ran aground in Apra Harbor Feb. 13.

is a Buffalo Soldier-class container ship. She is one of Military Sealift Command‘s seventeen container and roll-on/roll-off ships and is part of the 36 ships in the Prepositioning Program.