As part of a Department of Defense-wide initiative to eliminate sexual assault, Secretary of the Navy Ray Mabus directed a mandatory sexual assault prevention and response (SAPR) stand-down for all Navy commands to be completed by July 1.

“End state for the Navy stand-down will be that all service members and civilian personnel clearly understand SAPR principles and resources,” Mabus stated. “We will continue to explore new ways to meet the remaining challenges of reducing the prevalence of sexual assault, further increasing the quality of all aspects of our response system.”

Rear Adm. Tilghman Payne, Commander, JRM, stressed the importance of the training was to spread awareness of sexual assault within the fleet and encouraged everyone to be active bystanders when they see or hear anything that may hint at sexual assault.

“I need your help; the Navy needs your help,” he said. “We are trying to get to the left of this problem and we’re not doing it fast enough or well enough. We are having sexual assault in our ranks and we are at the precipice where the few in our ranks stand to dishonor the service of the many.”

Payne added that those who’ve committed sexual assault are only a small percentage of the tremendous men and women who serve in the armed forces and civilian workforce.

“That action stands to tarnish the rest of us and we have to…actively be engaged, actively intervene when we see bad behavior, when we see inappropriate e-mails or when we see something bad about to happen,” he said. “I need you to be actively engaged and thinking about this consciously every day in order for us to turn this around.” 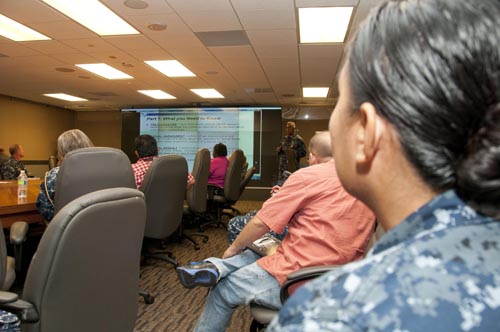 JRM Command Master Chief (SW) Greg Vidaurri facilitated the stand-down and actively engaged attendees to take part in discussions regarding sexual assault and their thoughts on ways to curb the number of reported and unreported incidents.

Senior leadership also advised staff that the issue of sexual assault can be prevented if it’s stopped before it can even begin.

“You have time now to decide how you’re going react if you see (sexual assault) and you have time to react when you see these things going on,” said JRM Chief of Staff Capt. Mark Scovill.  “I think you can predispose yourself to react if you make the mental leap that fraternization, alcohol abuse, abusive behavior in general is a precursor of rape and it’s not a matter of ‘if’ it’s ‘when.’”