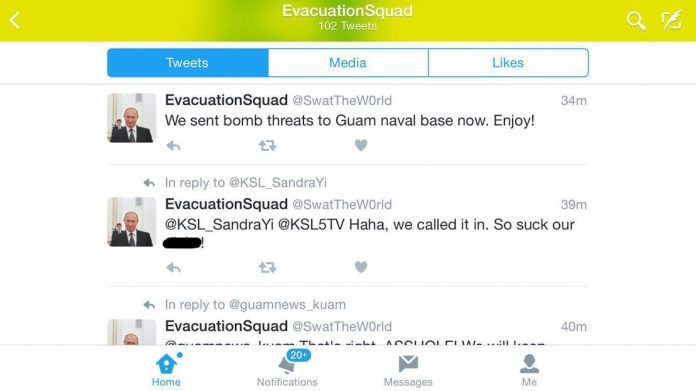 Minutes before PNC confirmed with Navy Officials, the Evacuation Squad had tweeted that they made a threat to Naval Base Guam. Twitter account has claimed responsibility for the Guam Premiere Outlets, Kmart, Micronesia Mall & The Agana Shopping Center. It is also threatening to make bomb threats at every Guam school tomorrow(Mon.)

This account has also claimed responsibility for calling in threats to the Guam Premiere Outlets, Kmart, Micronesia Mall & The Agana Shopping Center today(Sun) and some public schools last week. It is also threatening to make bomb threats at every Guam school tomorrow(Mon.)

A twitter account named the Evacuation Squad with the twitter handle SwatTheW0rld is claiming responsibility for calling in bomb threats to the Guam Premiere Outlets, Kmart, Micronesia Mall & The Agana Shopping Center. It is also threatening to make bomb threats at every Guam school tomorrow(Mon.) The account tweeted that it would make a threat to GPO before the threat happened.

This appears to be the same account that previously took credit for phoning in bomb scares to some of Guam’s schools last week. A Twitter account called Evacuators2k16 with the handle ev4cuati0nsquad took credit for calling in bomb threats to Okkodo, JFK and Inarajan middle school. The account claimed those threats were phoned in before that information had been made public. Prior to those three schools the majority of bomb threats at public schools had been written in restroom walls or on pieces of paper. PNC confirmed with GDOE officials that Okkodo, JFK and Inarajan middle school received bomb threats that were phoned in with automated messages.

The account which was called Evacuators2k16 appears to have resurfaced under a new name using a variation of it’s old handle ev4cuati0nsquad as the name of the account Evacuation Squad. This new account uses the handle SwatTheW0rld which is one of the hashtags and phrases that the old account used. The new account also claims responsibility for some bomb threats to Guam’s public schools last week and it uses a picture of Russian leader Vladimir Putin as it’s profile picture which is the same picture that was used by the old account before it was shut down. It also uses a picture of the flag of Hezbollah as it’s background picture.