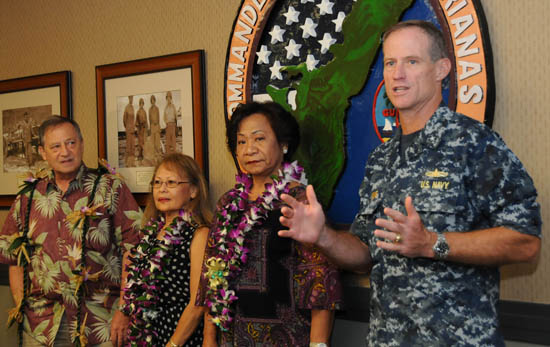 Guam – Navy leadership and colleagues gathered to celebrate the retirement of three Joint Region Marianas (JRM) staff members during a ceremony at the headquarters in Nimitz Hill December 5.

[36th Comptroller Squadron Commander Maj. Alan Copeland presented a special award to Alave for her service to the Air Force]

Faisao, who was born on Guam and raised in Barrigada, began her career with the federal government in 1968 at the Fleet Industrial Supply Center, Guam. She was also assigned to U.S. Naval Base Guam; U.S. Naval Computer and Telecommunications Station Guam; Naval Air Reserve Alameda, Calif.; Selective Service Organization; Defense Financial and Accounting Service; Naval Supply Center Oakland, Calif., and 36th Comptroller Flight at Andersen Air Force Base. She most recently served as a financial management specialist for JRM. She retired with 43 years of civil service.

Fisher was born and raised in Atlantic City, N.J. He began his naval service after enlisting in 1967 and served on active duty until June 1971. He was commissioned as a legal officer in the Coast Guard in 1978 and served on active duty until 1982. Following his military career, Fisher went on to practice private law but eventually returned to the Navy in 1983 serving at offices of the general counsel in Subic Bay, Philippines, Philadelphia, Pa., Washington D.C., Crystal City, Va., Patuxent River, Md., and most recently at JRM. Fisher, who has been on Guam since 2001, retired with 37 years of service.

Born in the Philippines and raised on Guam, Alave began her career in 1985 as a store cashier with Orote Point Commissary then at the Andersen Air Force Base (AFB) Commissary. In 1990, she was the lead accountant at Naval Supply and Depot; she then served as a supply technician at Andersen AFB. From 2010 to 2012, Alave worked as a financial technician for JRM. Alave retired with 27 years of service.