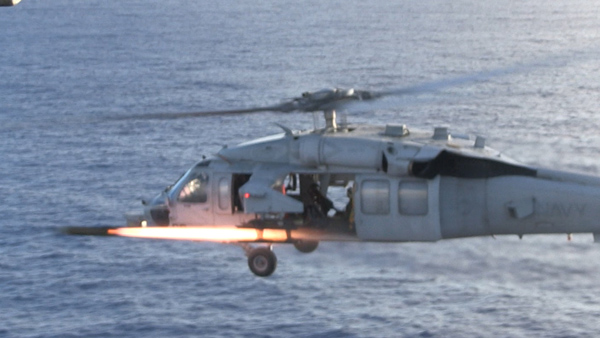 The objective of the simulated mission was to provide close-air support to military personnel on the ground at risk of being overrun by a simulated enemy unit.

“We checked in with 5th Air Naval Gunfire Liaison Company, tracking simulated enemy personnel moving in on a simulated village on FDM target range,” said Navy Lt. Jonathon Lance, a MH-60S Seahawk pilot with Helicopter Sea Attack Squadron 25, based at Andersen Air Force Base, Guam. “We received an update from the joint air controllers that they needed close-air support immediately on their position, so we followed that with one simulated Hellfire missile run, as well as several live-fire gun passes to suppress personnel in the area.”

The training has allowed many firsts not only for the Marine Corps personnel, but for the Navy service members as well.

“(Being able to) live fire with guns and Hellfire missiles, (happens to a) pilot maybe two or three times in a career,” said Lance. “This is outstanding training to be able to go from a forward operating base, head out and (destroy) a target.”

The close-air assault on FDM was made possible by several units, sections and services working together to accomplish the mission.

“We came up here in support of the Marines participating in FFII surge operation,” said Navy Lt. Monica Mondloch a MH-60S Seahawk pilot with HSC-25. “It is much better for us to work forward deployed from Guam, so we do not have to stop and refuel on our way to FDM.

“(Working with the Marines), having the forward operations base here on Tinian was helpful for us and has really helped us to accomplish our mission, and our assault today.”

Firing a live Hellfire missile at simulated enemy units was not the only highlight of the day for the helicopters at the range, as the crewman aboard each helicopter were also able to fire their weapons in support of the exercise as well.

“My job is to employ the crew-served weapons in the event we have any enemies coming out of the area we were attacking,” said Petty Officer 2nd Class Jeremy A. Cieplich, a naval aircrewman with HSC-25. “I was firing the (GAU-21/A .50 caliber machine gun) out of the left side and my crewmate fired the M240 out of the right side, so we had all angles of the helicopter covered.”

As the close-air support mission ended, Mondloch expressed her enthusiasm about the successful training and how interoperability helps accomplish a larger mission.

“We really appreciate the ability to be able to work with the Marines here,” said Mondloch. “It is just like working back at home except we are forward deployed. We have gotten all the support we have needed. The blue- green team is good to go.”