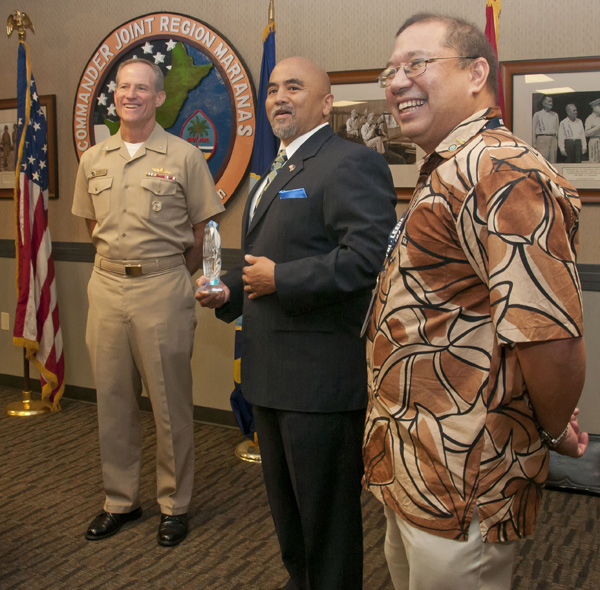 Rear Adm. Tilghman Payne, commander of JRM, presented a plaque of appreciation to the Office of the Attorney General of Guam and Guam Police Department (GPD). Payne said the successful closure of the case illustrated the important partnership between Guam’s military and local government agencies.

“Guam is home to thousands of service members and their families and many live in communities throughout the island,” Payne said. “This crime was indiscriminate and the criminals didn’t just take advantage of a military family, but a member of the Guam community. As part of the Guam community, we greatly appreciate the tremendous support we received from the attorney general’s office and GPD that led to the successful prosecution of those responsible for this terrible crime.”

Attorney General Leonardo Rapadas accepted the plaque on behalf of his office.

“We just try and do our jobs, and to get recognition like this really solidifies the relationship between our communities,” Rapadas said. “We don’t want to distinguish between the military and the civilian communities. We all live on the same island and we are all working for the same thing.”

In the early hours of April 20, 2013, a military dependent was found by her roommates bound, beaten and unconscious in her home on Nimitz Hill. Investigations led officers to three suspects, whom have since been convicted for the crime.