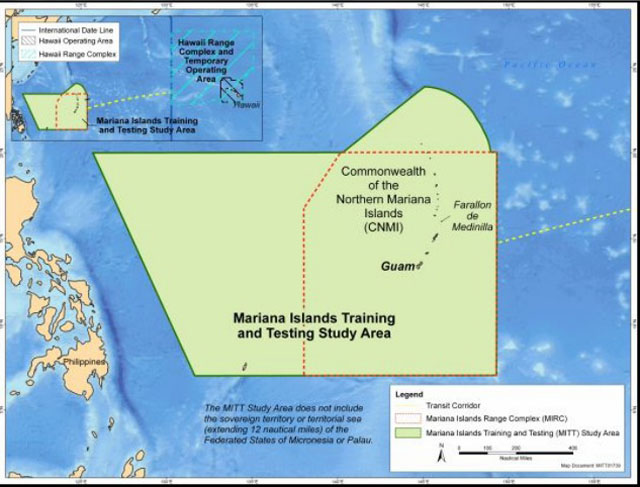 The Navy has completed its final supplement to the 2015 Mariana Islands Training and Testing (MITT) Environmental Impact Statement and submitted it for public review.

The supplement examined the kind of training activities that have occurred in the Study Area for decades by providing an updated assessment of the potential environmental impacts associated with the use of sonar during ongoing at-sea training exercises, test firing range and bombing exercises at and on Farallon de Medinilla, as well as other naval testing activities within the Mariana Islands Training and Testing area.

The Navy evaluated new, relevant information that only became available after the release of the 2015 MITT. That new information includes more recent marine mammal density data and new scientific information.

The updated EIS is needed to support the Navy’s request for federal regulatory permits and authorizations under the Marine Mammal Protection Act and the Endangered Species Act.

The Proposed Action is to continue at-sea training and testing activities within the Study Area.

These activities include the use of active sonar and explosives while employing mitigation measures.

The need for the Proposed Action action is to ensure the Navy, other U.S. military services, and the U.S. Coast Guard meet their respective missions, which for the Navy is to maintain, train, and equip combat-ready forces capable of winning wars, deterring aggression, and maintaining freedom of the seas.

To achieve and maintain military readiness, the Navy proposes to:

The Study Area remains unchanged and includes the existing Mariana Islands Range Complex (MIRC), additional ocean areas outside of the MIRC, a transit corridor between the MIRC and the Hawaii Range Complex, and Navy piers located in Apra Harbor.

Other activities and land components associated with the MIRC (except FDM) are not considered in the supplement because they have not appreciably changed and remain covered under the 2015 analysis and associated authorizations.

AVAILABILITY OF THE FINAL SUPPLEMENTAL EIS/OEIS:

The Final Supplemental EIS/OEIS is now available to the public on the project website www.MITT-EIS.com.

In accordance with National Environmental Policy Act regulations, the Navy will wait 30 days after publication of the Final Supplemental EIS/OEIS before making a final decision on the action.

Copies of the Final Supplemental EIS/OEIS have also been sent to the following public libraries: