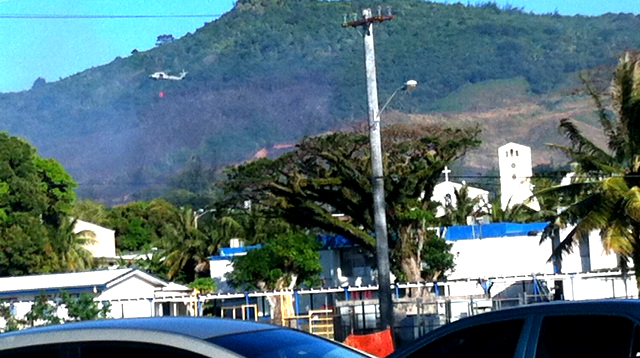 A Navy MH-60S helicopter was launched this afternoon from Andersen Air Force Base to the scene. The squadron is working closely with Guam Fire Department (GFD) responders on the ground.

“The Navy HSC-25 helped us a lot in a lot of the search and rescue missions,” said Lt. Ed Artero, GFD public affairs officer. “It’s been fortunate that we have a good working relationship with them and they’re able to come out and assist in the grass fire.”

HSC-25 is the Navy’s only forward-deployed MH-60S expeditionary squadron. As a part of Helicopter Sea Combat Wing Pacific, it provides an armed helicopter capability for U.S. 7th Fleet in support of logistics, search and rescue and humanitarian assistance missions.

HSC-25 is also the only squadron that maintains a 24-hour search and rescue and medical evacuation alert posture, directly supporting the U.S. Coast Guard and Joint Region Marianas.