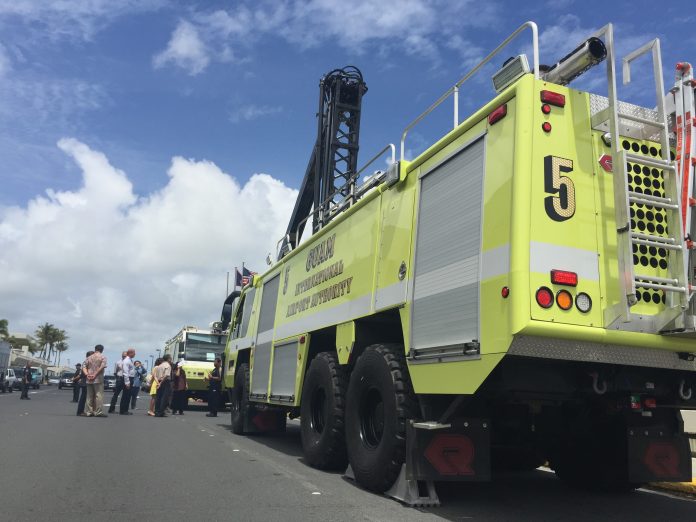 Hagatna, Guam-  While the Guam airport is most commonly home to numerous aircrafts, it is now the host of Fire Fighting Apparatus #5; Guam’s most advanced and newest Aircraft Rescue and Fire Fighting Unit.  Island dignitaries joined the GIAA Board of Directors and GFD for the commissioning ceremony to reveal the special qualities of the new addition.

GIAA Board of Directors Chairman, Edward Untalan, was present at the ceremony calling the new truck an “impressive machine” after sharing the specifications of Unit #5.  According to the GIAA’s project description, the ARFF Unit #5 is Manufactured with custom specifications for Guam’s airport safety requirements and equipped with the following features:

-Meets safety measure specifications for the operation of wide-body aircraft, such as the Airbus A380 and the B787;

-Corresponds to American, European, and Japanese standards, including Euro 3;

-Pump outputs of up to 2,500 gallons per minute with suitable automatic foam proportioning systems;

-Pump drive by means of power divider or through its own pump motor;

-Roof and front turret for an output quantity of up to 2,500 gallons per minute and a range of up to 250 feet;

Lieutenant Governor Ray Tenorio called it a “fantastic machine” while mentioning that the $891,966 unit cost is a great investment because it is used for protecting multi-million dollar facilities and aircrafts. Unit #5 was fully funded under a Federal Aviation Administration grant.  Lieutenant Governor Tenorio also mentioned that Unit #5 will be used to help protect the airport’s new runway which will host larger aircrafts that will bring new flight opportunities for Guam.  GIAA states that it has a 760 horse power engine which helps fulfill a three minute rapid response to aircraft contingencies.   It is the only one of it’s kind of the five fire trucks in the ARFF Division.  Two more of these units will eventually replace the older versions.