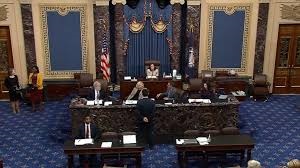 (ABC News) – After a little under 15 hours of closed-door, bipartisan talks, White House Legislative Affairs Director Eric Ueland announced to reporters at about 1 a.m. local time that negotiators have a deal on the $2 trillion economic stimulus package.

They are still drafting some of this deal, but negotiators say they have an agreement.

“Ladies and gentlemen, we are done. We have a deal,” Ueland said. “Much of the work on the bill text has been completed and I’m hopeful over the next few hours [it will be finished] … We will circulate it early in the morning.”

Ueland said they “have either clear, explicit legislative text reflecting all parties, or we know exactly where we’re going to land without a legislative text, as we continue to finish.”

Sens. Mitch McConnell and Chuck Schumer were expected on the Senate floor overnight.

Trump says any decision to relax guidelines will be based on “hard facts and data”
At the later afternoon White House briefing, President Trump continued to lay the groundwork for rolling back social distancing guidelines as he opened the daily coronavirus task force briefing and pointed to Easter as the end of the “historic battle” against COVID-19.

“Ultimately, the goal is to ease the guidelines and open things up to very large sections of our country as we near the end of our historic battle with the invisible enemy. It will go on for a while but we will win,” Trump said. “Easter is our timeline, what a great timeline that would be.”

As Dr. Anthony Fauci stood behind him, Trump said any decision on “opening up” the country would be “based on hard facts and data.”