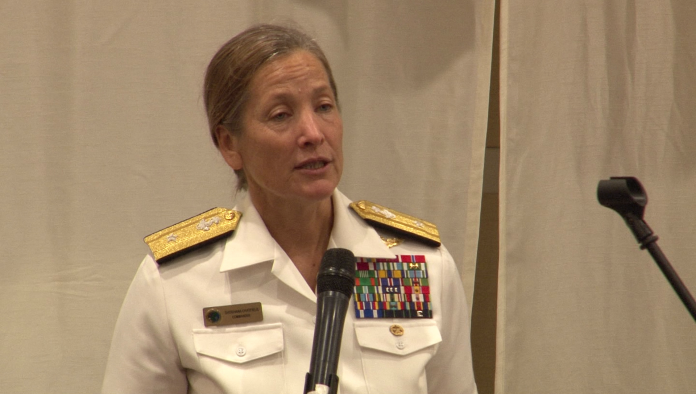 Rear Adm. Shoshana Chatfield says since 2011, the Department of Navy has reduced its military footprint by 654 acres.

Guam – Some progress has been made on the H2B visa matter, but it’s of little substance as it could take several months before any action is taken on reversal of the H2B denials.

At a Guam Contractors Association membership meeting today, GCA member John Robertson provided an update on the H2B visa issue in Congress, noting that the House passed the NDAA FY’18 with approval for 4,000 H2B workers. However, Robertson says this would only apply to construction projects inside the fence. In addition, the Senate version could still gut the defense bill and remove the H2B approvals altogether.

“H2B workforce for military projects–that does not take care of work outside the fence, civilian projects will go a long way on work solving the overall problem. However, the way things work, we wait on the Senate to make their decision … and the Judiciary Committee chimes on this as well. So getting the president, getting his signature, we’re probably looking at something like April of next year before we can hire H2B workers on that program,” announced Robertson.

The guest speaker at today’s GCA meeting was Joint Region Marianas Rear Admiral Shoshana Chatfield. She expressed her support for the H2B visa but acknowledged that it’s a decision that rests with the federal government.

Meanwhile, she gave an update on progress made on the net negative agreement signed by Governor Eddie Calvo and then-Navy Undersecretary Robert Work back in 2011.

“It was a crucial step in properly balancing the concerns of the people of Guam with our national and regional defense commissions and requirements,” she said. “To date, we’re on pace to be net negative by 654 acres  as compared to the Department of Navy footprint in 2011.”