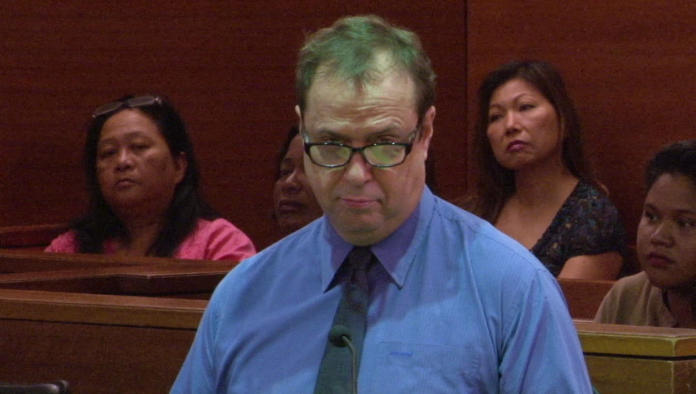 Two witnesses testified today but neither allegations are part of the current case for which Michael Ehlert is standing trial.

Guam – Day three of Michael Ehlert’s trial continued as two victims told their stories of how the University of Guam professor threw parties at his Ipan residence and both allege sexual assault.

For twelve years, Ehlert has been throwing parties at his home. The guest list, well that comprised of UOG Students, many of whom took one or more of Ehlert’s Psychology courses. In a written statement to the University of Guam, Ehlert was quoted saying, “In 12 years of students having parties at my place there has never been a report of an inappropriate event.” His alleged victims, however, tell a different story.

In court, two witnesses shared details of their encounters with Ehlert. While both testified in court against Ehlert, the allegations they make against Ehlert are not charged in this case.

The first witness, L.R., shared that she was familiar with Ehlert’s infamous student parties when she was enrolled at UOG from 2008 to 2011. But it wasn’t until 2011 that a friend convinced her to go to one of the parties to “show face.” According to L.R. she “felt it was weird and inappropriate” and although she did not want to go, she agreed under the condition that their stay would be short.

L.R. said she was only at the party for one-hour before deciding to leave, stating that as she was leaving and saying her goodbyes, Ehlert grabbed and squeezed her butt while stating “What? You’re leaving already? I was hoping to spend time with this.”

The second victim, R.H., alleges she was raped in 2009 while she too was at one of the student parties where she recalls drinking an unknown substance. According to the witness, the assault began in the water when Ehlert grabbed her breast and attempted to digitally penetrate her.

The victim stated that she doesn’t remember how she ended up in the bedroom but she recalls Ehlert pinning her down, placing his genitals in her face before he raped her.

Trial continues Wednesday at 9 am.