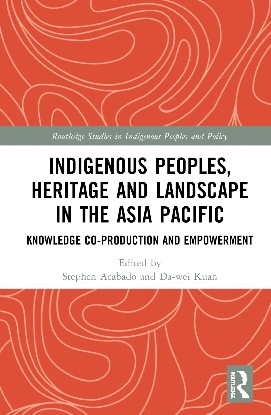 The social movement in Guåhan behind protecting the latte village sites and biocultural diversity of Litekyan, or Ritidian, is examined in a book released Friday titled “Indigenous Peoples, Heritage, and Landscape in the Asia Pacific: Knowledge Co-Production and Empowerment.”

The book — edited by Stephen Acabado and Da-wei Kuan of the University of California, Los Angeles, and National Chengchi University, Taiwan, respectively — compiles several cases throughout the Asia Pacific region in which collaborative research is reconnecting local and indigenous relations to the landscape and empowering indigenous and descendant communities.

Else Demeulenaere authored the Guam-focused chapter — titled “Prutehi Litekyan: A social movement to protect biocultural diversity and restore indigenous land sovereignty on Guåhan.” It focuses on the action group Prutehi Litekyan, or Save Ritidian, a key player in the social movement protesting the construction of a Live Fire Training Range for the military in an area, known as Tailålo’, of historic and cultural significance to the CHamoru people.

Demeulenaere, who serves as associate director of the Center for Island Sustainability at the University of Guam and is a candidate for a doctorate in interdisciplinary studies, used social movement theory to guide her research and writing of the chapter.

She is also part of Prutehi Litekyan herself, which she said provided her with a deeper understanding of the movement, its weight, and the people behind it.

Tailålo’ is an area of environmental significance, with more than 180 acres of limestone forest inhabited by endemic, endangered, and threatened species. It is home to the last, critically endangered adult Håyun lågu tree (Serianthes nelsonii).

“The limestone karst upon which the forest is growing is itself unique and once destroyed cannot be recovered,” she said.

In addition, the lands and the waters of Litekyan, laying below the cliffs of the firing range, have been used for traditional fishing, healing practices, and ceremonies — activities that will be endangered by the partial inaccessibility of the area because of the large surface danger zone.

Her research analyzed the National Environmental Policy Act to determine if it effectively addresses both environmental protection and the indigenous rights of the CHamoru people. Her chapter describes the difference in how the landscapes of Tailålo’ and Litekyan are viewed by the CHamoru people and the NEPA.

Demeulenaere’s research employed participant observation and involved interviewing more than 50 activists, cultural practitioners, and other stakeholders from local and federal agencies, including the military.

“When conducting social movement research, it is important to engage with the community to comprehend the lived experience. If you are not part of it, you are not going to be able to really say what the people feel,” she said, adding, “The chapter is grounded in indigenous epistemology, emphasizing the CHamoru worldview and their strong connection with nature.”

Demeulenaere also touches on the history of the colonization of Guam and the people’s “quest for self-determination and control of their land.” She notes that the social movement to protect Litekyan has resulted from “both ongoing social processes and historical patterns of oppression that still shape the nature of the island’s governance.”

In conclusion, she suggests, “A bottom-up approach is needed guided by a co-production of knowledge recognizing and respecting indigenous perspectives and practices.”

The chapter is interwoven with quotes from activists, traditional knowledge holders, and scientists.

“Their words root the social movement which brought together our community in a unique way, voicing their concerns to safeguard Litekyan and Tailålo’s biocultural diversity and landscapes for future generations,” she said.

The book is published by Routledge. Online copies are available at https://bit.ly/3AdeyCH, and hard copies may be ordered on Amazon at https://www.amazon.com/Indigenous-Peoples-Heritage-Landscape-Pacific/dp/0367648717.