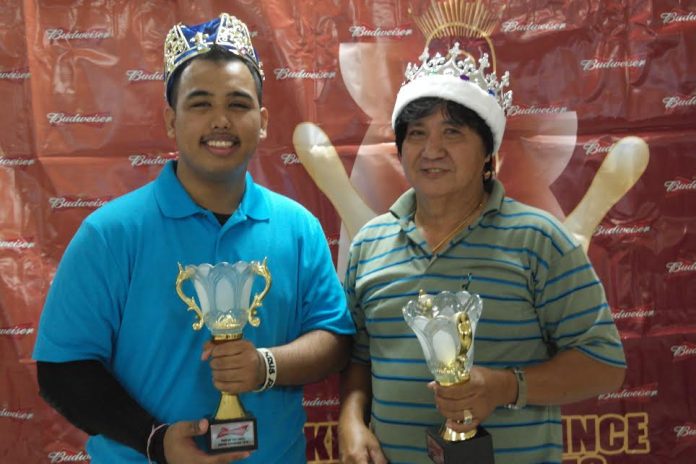 Tamuning, Guam– After eleven monthly tournaments, the 2013 Budweiser King and Prince of the Lanes Grand Champions were crowned.  The event featured the top sixteen bowlers from each division who took to the lanes for a chance at the packaged prize for the year end finale.

JD Castro led throughout most of the qualifying rounds held earlier in the day on the tough dual pattern lane condition. However, a 234 game in the seventh catapulted Duane Camacho to a brief lead.  Thereafter, Castro bounced back with a 257 game and never looked back outpacing the field by 115 pins.  Castro averaged 213 pins per game knocking down 2555 pins winning 7 of 12 match play games for a 2625 grand total.  Greg Borja slipped past Ricky Duenas for second seed with a 2510 total, seven pins ahead of the later.  Keith Guerrero landed in fourth place with a series of 2491 followed by Duane Camacho 2465 while Brian Manibusan’s late surge claimed the sixth and final post ousting Jay Leon Guerrero in the last game 2408 to 2392.

Anthony Meadows led the Prince Field with 1645 points with 60 bonus points and 144 pins of handicap as Von Cabral fell to second after a final game let down with 1583 pins.  Matthew Cruz followed suit with 1574, Colleen Dela Cruz 1558, Jhun Viray 1518 and Juan Blas’ 1485 advanced to the elimination rounds.

The first elimination round pitted the 3rd seed against 6th and 4th versus 5th for both divisions.  In the King division, Brian Manibusan opened a lead on 3rd seed Ricky Duenas but was unable to sustain it falling to the higher seed 182-141.  4th seed Keith Guerrero fell behind early against 5th seed Duane Camacho but was able to move on after two missed spares in the ninth and tenth frame caused the defending champion the match 191-179.

Prince 3rd seed Matthew Cruz avoided an early exit after 6th seed Juan Blas opened with a double.  However, low counts throughout the remainder of the game caused his dismissal 162+14 to 124+30.  5th seed Jhun Viray got past 4th seed Colleen Dela Cruz on a last frame miss by the higher seed 144+11 to 131+16.

In the King semi-final match Ricky Duenas extended the series to a second game in the must beat higher seed two games format winning the first game 173-169 against top seed JD Castro.  Duenas opened the second game with a double to take the lead on the top seed and punch his ticket to the finals after Castro’s pocket hit in the tenth left a solid pin ten for a 196-170 set.  Second seed Greg Borja advanced to the finals dispatching 4th seed Keith Guerrero 203-160.

Top seed Anthony Meadows advanced to the finals of the Prince division with a 172+18 to 156+14 victory over 3rd seed Matthew Cruz.  A second game was forced by 6th seed Jhun Viray as he topped second seed Von Cabral in the first game 185-147.  In the second game it was all Viray as he led from start to finish with a 182+11 to 161+9 win to advance to the finals.

Top seed Anthony Meadows took control of the best of three Prince finals winning the first game 172+18 to 173+11.  Jhun Viray reversed the tides in the second game taking advantage of missed spares by the top seed to force a game 3 on a 121+18 to 170+11 score.  The final game witnessed a see saw battle as neither bowler was able to get the upper hand.  In the final stanza, Meadows left a 4-6-7 split to finish with a 145+18 game which forced Viray to spare a 1-2-5 leave.  Viray converted then hit a nine count to claim victory with a 159+11 game to 147+18.

The King of the Lanes Grand Finals pitted an all in the family match up as nephew and 2nd seed Greg Borja depleted 3rd seed Uncle Ricky Duenas’ hope in the first game demolishing the elderly 224-108.  The streak continued for the younger foe as he claimed his first Grand Finals championship on the heels of a 208-189 victory after the later left a pin five in the final stanza 205-189.