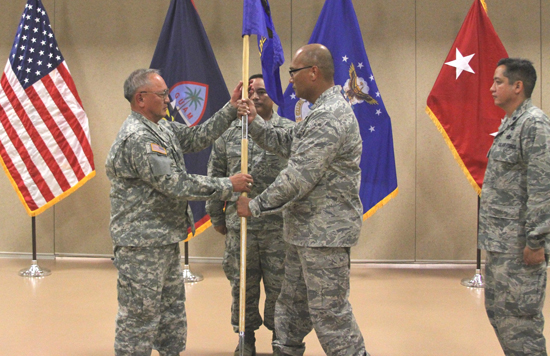 JOINT FORCE HEADQUARTERS, Guam – After about six busy years at the helm of the Guam Air National Guard, Col. Johnny Lizama handed over the reins of the unit during a change of command ceremony yesterday at the Guam National Guard’s Barrigada Readiness Center.

“Throughout his six year tenure as the command or the 254th Air Base Group, Col. Lizama displayed effective leadership by providing pertinent training as witnessed through the initiation of a five-year deployment training program that directly supported major contingency and worldwide operations.

“His effective leadership created a nurturing environment in which the retention rate of the Air Guard hovered. He is the epitome of leadership and command,” said Maj. Gen. Paulino.

“He is a proven leader and has held many challenging positions that have prepared him for this command… His ability to successfully navigate challenging situations is truly the gold standard of command,” he said.

Col. Lizama thanked his family for their support during his time of command and during his remarks, likened his tenure to being part of “great partnerships.” He noted these partnerships included those with his wife, his family, his GUANG core group, full time staff, Army brothers, 36th Air Base Wing, Alaska National Guard, Air Force Reserve, and Pacific Air Forces. 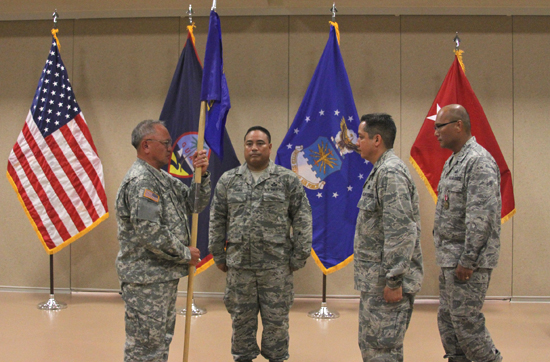 “I said on my first day as commander, to prepare yourselves to deploy. And after hundreds of deployments, thousands of workdays, millions of dollars, you have been there and done that. I ask you to continue to prepare yourselves, because when you do that, you have the right mindset to be ready. And the public can be reassured, that the Guam Air National Guard, will perform their mission in an outstanding manner as professionals,” he said.

After the official assumption of his command through the exchange of the unit guidon, Lt. Col Artero thanked his family for their guidance, Maj. Gen. Paulino for the trust and confidence in him, and Col. Lizama for his mentorship, and charged his Airmen to continue their hard work.

“I am definitely excited to take command of the best Air National Guard unit, not that I’m biased… To the men and women of the 254th Air Base Group, continue to do what you do, first class and true professionals, showing your heritage, tradition and dedication in everything you execute,” Lt. Col. Artero said.

Gov. Eddie Calvo noted how the Guam Guard’s legacy has been rich, although not very long.

“As I’ve been governor for two and a half years, I’ve seen … the deployments of our Guardsmen to far away shores… In these past 30 years, our Guam Guardsmen have been to the four corners of the world,” Gov. Calvo said.

The change of command ceremony was attended by close to 500 Airmen, Soldiers, civilians and family members of the two officers.

The 254th ABG is the major command in the GUANG, overseeing Airmen assigned to its subordinate units which include the 254th REDHORSE Squadron, 254th Security Forces Squadron, 254th Force Support Squadron, and 254th Comptroller Flight.