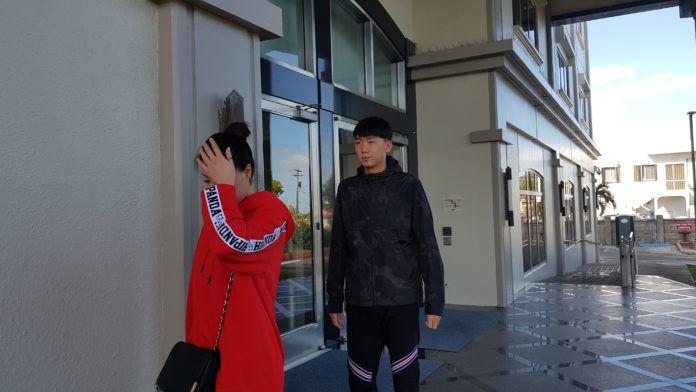 Guam – The government attempted to offer unsubstantiated claims as evidence of culpability in the case against Yunkai Lu, one of the three men allegedly involved in a scheme to purchase high end merchandise with counterfeit credit cards, but, District court Judge Frances Tydingco-Gatewood would not have it.

Yunkai Lu was set to accept a plea offer from the government for his role as a “Shopper” in the scheme allegedly orchestrate by a secret Chinese organization. In acceptance of the offer Lu pleads guilty to possession of 59 bogus credit cards.

And while the court went through the details of the plea agreement, it did not accept the guilty plea citing that the court is waiting for the completion of a pre-sentence report.

The court did however, give the government an opportunity to point out the culpability of each defendant named in the case. Daoquin Liu was identified as the “organizer, handler or ring leader.” Ziwen Weng and Lu were identified as “Shoppers,” however, according to the government Lu had a larger role in the scheme than Weng because he allegedly communicated more with Liu.

But when asked for evidence to support the claim the government was only able to divulge details of an ongoing investigation, details that have yet to be substantiated.

The government revealed that Weng, and Lu’s trip to Guam to ” go shopping” may not have been the first shopping trip the two embarked on. The government shared that photographs of declined credit card transactions at a luxury store in either California or Seattle, Washington, called Hermes, were observed on Weng’s phone. The credit cards transactions named Lu as the bearer of the fake credit card and the transaction amount was over $10,000. Adding that Lu stood to gain 15-percent of the cost of the merchandise he bought using the fake credit cards. The government further disclosed that travel itineraries and boarding passes for a flight to Hawaii along with “selfies of Weng and Lu in Honolulu were also observed on Weng’s phone.

The government says that this was evidence of possible prior acts. However, none of these prior acts have been corroborated. This assertion to the court caused serious concern for Judge Tydincgco Gatewood, who stated, “you can’t come into my court, any court and say evidence that could be damaging that’s still under investigation and say that one is more culpable that the other. Its not fair to speculate culpability.”

The defense was equally concerned and contended that Weng was the one who brought Lu into the scheme, revealing that the trip to Hawaii was when the two young men met a woman identified as Lu Ti Ting on the plane, that woman allegedly put the two in contact with Liu.

With this before the court, Judge Tydingco Gatewood indicated that she would take the guilty plea at the sentencing hearing. But before she adjourned the hearing she had this to say to the government, “be warned that I expect a thorough and substantiated memo on culpability.”

Lu is subject to deportation as a result of a felony conviction. Sentencing for all three defendants is set for February 20th.