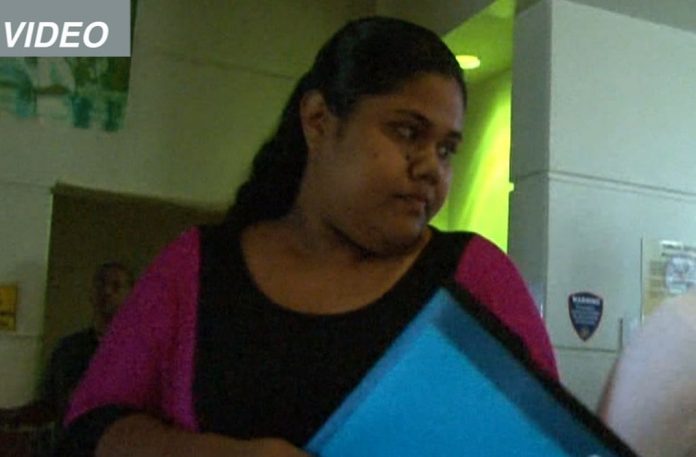 New evidence has surfaced on the eve of Quadlyn Gorong’s trial that she was not the cause of the tragic crash that took the lives of three teenagers two years ago.

Guam – Jury selection and trial was originally set for today for the woman accused of a hit-and-run in 2014 that killed three teens.

But on the eve of what would have been a trial that could have sent her to prison for a significant amount of time, Superior Court Judge Maria Cenzon has granted a motion brought on by the prosecution and not by the defense to dismiss the charges against Quadlyn Gorong without prejudice.

Judge Cenzon explains the reason for the dismissal is due to new exculpatory evidence found in an interview conducted just four days before trial was scheduled to begin. That interview was with medical examiner Dr. Aurelio Espinola. It turns out, according to Chief Prosecutor Phil Tydingco, Gorong was not driving the vehicle that killed the three girls. In fact, Gorong’s vehicle did not show damage that one would have if it had hit three people at 30 miles per hour.

Gorong’s attorney, Randy Cunliffe, told PNC that he spoke with Dr. Espinola in January of last year, who said one of the injuries was made by a bumper that was 24 to 25 inches off the ground. However, Gorong’s bumper is only 17 inches from the ground, and Cunliffe states that the vehicle that killed the girls was most likely a pickup truck.

On the night of the accident, Cunliffe says Gorong admits she ran over something that got caught in her wheel well. And as a measure of good faith, Gorong turned herself in because she was unsure what she may have run over. She was never arrested because, according to Cunliffe, even the preliminary investigations did not show that she was involved.

But even without the proper evidence, Cunliffe says the Attorney General’s Office sought a grand jury indictment anyway on charges of three counts of manslaughter, three counts of negligent homicide, reckless driving and reckless conduct.

As a result of this entire mess, Cunliffe points out that his client was subjected to scrutiny from the public and her reputation was ruined. Cunliffe says Gorong was forced to go on curfew for more than year and was not allowed to drive a car. She even lost her job because of the accusations. Cunliffe says she now has to go through the arduous process of trying to rebuild her life.

Chief Prosecutor Phil Tydingco says, while there are no other suspects at this time, they will be working with the Guam Police Department to start investigations. On the other hand, Atty. Cunliffe believes that, due to the lack of forensics, it may be nearly impossible to resurrect the investigation.