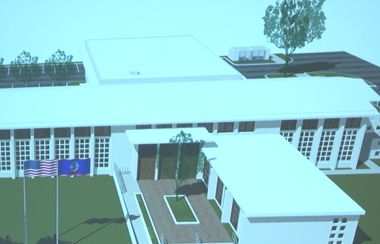 Guam – Ever pass by Hagatna and wonder when the Guam Congress building will be built?

Senator Rory Respicio says the exterior should ready in time to display during the Festival of the Pacific Arts, but the entire building will take a longer while.

“Best case scenario, it’ll be done in May. Worst case scenario: July but the contract says they have to be done by August. Since we’re having Fest Pac in May, we asked the architect to work outside in,” he says.

Respicio explains that stakeholders wanted to incorporate some of the design aspects of the old Session Hall, which was deemed unsafe in 1989. Some of those aspects are the high ceilings, second-floor lobby and large windows.

“This is one of the things I really liked in the old Session Hall where the public can be on the second level and look through what’s happening in the second floor. Another item that stood out were the large windows,” he says.
According to Respicio, the total cost for the Guam Congress building is about $7.5 million. He explains, “The new building would cost about $3.5 million for the Session Hall paid for by a grant from the Historic Preservation Trust and another $4 million dollar 20-year loan for Phase II being paid through a loan from the Bank of Guam.”
Which to Respicio financially makes sense. He says basically GovGuam will save money in the long run, considering the fact that the government paid about $10 million in total rent for the temporary Legislature building in Hagatna so far.
Respicio says, “For $21-thousand a month the Legislature is paying for the temporary building made permanent. We want to end all that. The good news is we’re currently on a month-to-month in the current building we’re at so we’ll be able to terminate that lease as soon as we get the occupancy permit to move in. The money we’re spending to rent the building would actually be enough to pay for that through that financing.”
Respicio says the Hagatna revitalization plan also includes relocating some of the administrative offices to the island’s capital and moving the Department of Corrections lock up.
He explains, “There’s also part of that Hagatna redevelopment plan is to take that DOC out of Hagatna and moving. So there’s a lot of discussion about how to turn Hagatna around.”