Guam – Sports teams in Talofofo will find their multi-purpose field clean and ready to play on this week.

Over 20 new recruits and about 10 Soldiers from the Guam Army National Guard Recruiting and Retention Battalion, spent almost a couple of hours early Sunday morning at the Talofofo multi-purpose field, picking up trash and mowing the grass, in and around the field.

[New Recruits and Soldiers from the GUARNG Recruiting and Retention Battalion, start spreading across the Talofofo sports field to conduct their clean-up as part of the Guard the Environment program. (U.S. Army National Guard photo by CPT Ken Ola/Released)]

The clean-up was part of a nationwide National Guard initiative called the Guard the Environment Program, which encourages Soldiers to spend some time during one of their weekend drills, to conduct various clean-up efforts. These events include beautification of parks to clean-up of riverbanks, lakeshores, beaches, and highways.  For these new recruits, it was a chance to help the island environment.

The new recruits are part of the GUARNG’s Recruit Sustainment Program (RSP).  The RSP is a program designed to help recruits be physically and mentally prepared for basic training. 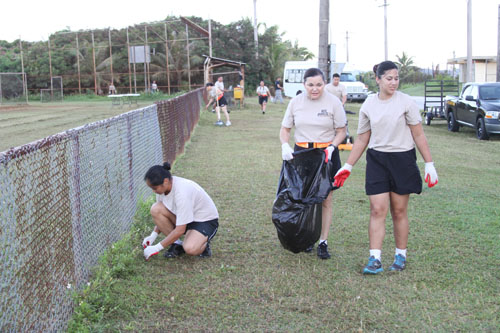