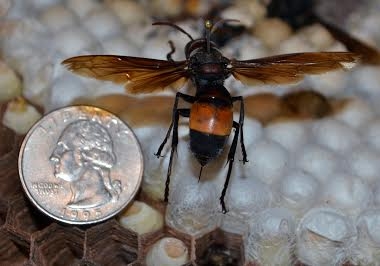 A new species of wasp was recently found on Guam and identified by entomologists at the University of Guam College of Natural and Applied Sciences (CNAS) as Vespa tropica, also known as the greater banded hornet.

THE GREATER BANDED HORNET HAS FOUND ITS WAY TO GUAM

A new species of wasp was recently found on Guam and identified by entomologists at the University of Guam College of Natural and Applied Sciences (CNAS) as Vespa tropica, also known as the greater banded hornet. These wasps are large and aggressive which make them a possible health hazard to individuals with allergies to bees and wasps as well as children and the elderly. Vespa tropica is found in China, Japan, Malaysia, Hong Kong, Singapore, India, and the Philippines. These wasps raid the nests of other wasp species to take larvae back to their own nest to feed their larvae. The greater banded hornet has a distinct, bright yellow band around its abdomen. They build their nests in hollow trees and other protected areas or underground. Queens are about 30mm in size and the workers average 24-26mm, which is slightly larger than the diameter of a quarter. Two colonies have been found on island, one in Upper Tumon and one in Yona. “Residents of these areas called the CNAS Entomology Lab for assistance because people were getting stung. The sting from this large wasp is very painful,” said CNAS entomologist Dr. Ross Miller.“Both colonies have been destroyed, but since they were found in two different parts of the island, this hornet may already be established on Guam. We would appreciate help in knowing if there are other colonies and encourage the public to contact CNAS if they have seen this wasp,” said Miller. Please call 735-2001 to report a sighting of this new invasive wasp. Be prepared to give your name and contact information so that someone from the Entomology Lab can return your call. Alternatively, email Dr. Miller at millerr@triton.uog.edu.Extension entomologist Dr. Aubrey Moore has prepared an informative fact sheet on the greater banded hornet and other recently arrived invasive species, which are available online at cnas-re.uog.edu/guam-new-invasive-species-alerts.Invasive species are everyone’s responsibility. The University urges the public to follow the Guam Customs and Quarantine Agency and Guam Department of Agriculture rules and regulations to avoid accidentally introducing invasive species to the island. Eradicating or controlling an invasive species takes expertise, time, and a tremendous amount of resources.For more information regarding the work UOG scientists and students are doing at CNAS, please visit cnas-re.uog.edu.Photo credits: Olympia Terral