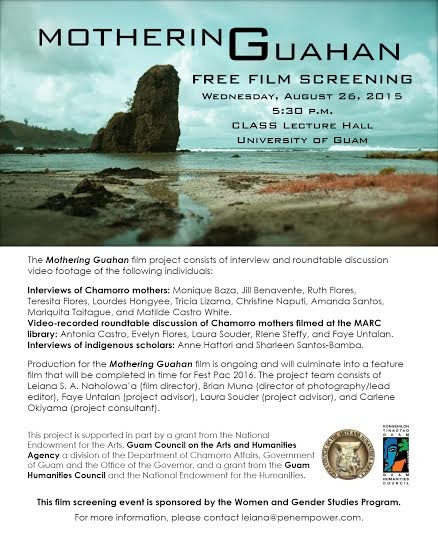 Another local film is underway. This time, it’s about the role of women in Chamorro society.

Guam – Ever wonder what the role of women was in the ancient Chamorro times? Leiana San Agustin Naholowa’a is on a journey to not only find out more about her ancestors, but also to see how it was like to be a woman back in the days and how the role of motherhood has changed over the years. Naholowa’a plans on sharing her research with the local community with a film titled Mothering Guahan.

Mothering Guahan Project Advisor Dr. Faye Untalan says, “What she’s trying to do is to trace back over history, such as written legends, written materials, on women on Guam to define better the power of the women in Chamorro society.”

Untalan says Guam’s richness in history, from Guam’s colonization, to Catholicism, to the Americanization of our island, is what influenced the change of the mother role in the modern Chamorro society.

Untalan explains how women held a lot of power hundreds of years ago. She says, “Chamorro is a matrilineal society. Women have a very special role in traditional Chamorro as we have learned in the course of years. The women holds a very important, very powerful role in the family.”

As part of research for the Mothering Guahan film, the group interviewed Chamorro women to find out how these women view themselves as mothers in today’s world.
Untalan says, “What Leiana did was interviewed a variety of Chamorro women hoping to getting a representation of different perspectives about their idea of what a Chamorro women is, what their role is, what their responsibilities are, what do they find themselves to be about.”
Untalan says the goal of the film is to inspire the younger generation. Untalan explains why it’s so important to learn about one’s culture and upbringing. She says, “I think that’s really important. For me as a Chamorro woman, that’s important. When I look back, I ponder what makes me what I am, I cannot not look at how I was raised by my mother, how I see the role of my mother, and my aunts and my grandmother, how they function and that’s how we become.”
Catch the film screening of the interviews and panel discussion video footage for Mothering Guahan tonight at the CLASS Lecture Hall at the University of Guam. Production for the film is ongoing and will culminate into a feature film that will be completed in time for Fest Pac 2016.