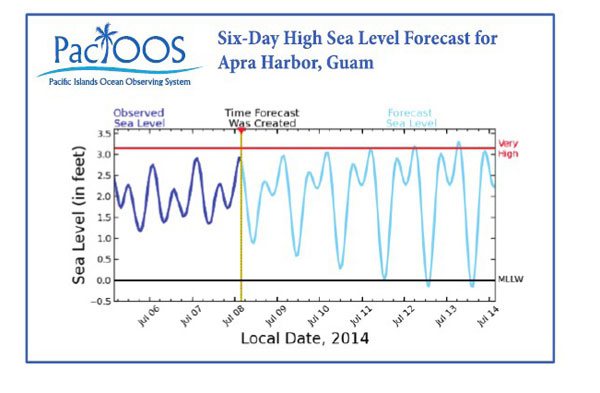 A team of physical oceanographers working with the Pacific Islands Ocean Observing System (PacIOOS) has developed new tools to forecast potential inundation events so that affected communities can better prepare and respond to such threats days in advance. The forecast models are called the PacIOOS Six-Day High Sea Level Forecasts, and the most recent developments include Apra Harbor in Guam and Malakal in Palau.

“Along with a more accurate analysis of the tides, the PacIOOS Six-Day High Sea Level Forecast tool utilizes analyses of several kinds of non-tidal sea level variability that can add to the height of the tide to produce unexpected flooding in coastal areas in the absence of storms or tsunamis,” explains Dr. Martin Guiles, PacIOOS Senior Physical Oceanographic Research Specialist and project lead.
“The predictions include the influences of currents and eddies that evolve over days, as well as shorter period motions not included in tide-only forecasts.” Dr. Guiles reiterates that the forecasts do not include predictions of tsunamis or storm surge flooding. In case of those events, the public is advised to seek advice from the National Weather Service.
Dr. Guiles and Dr. Doug Luther, PacIOOS co-investigator and Professor of Oceanography at the University of Hawaiʻi at Mānoa, developed these forecasts in response to requests from ocean stakeholders in the PacIOOS region. Fishermen, divers, surfers, boaters, businesses, government agencies, and emergency responders all benefit from the increased prediction accuracy of sea level in areas where there may be an inundation and flooding threat. More informed citizens and agencies lead to better decisions and preparation.
To access the PacIOOS High Sea Level Forecasts, check out the PacIOOS website at www.pacioos.org.
The following link goes directly to the forecast for Apra Harbor in Guam: http://pacioos.org/data_product/SLpred/Apra_forecast.php
The link for the Malakal, Palau forecast is: http://pacioos.org/data_product/SLpred/Malakal_forecast.php
About PacIOOS
The Pacific Islands Ocean Observing System (PacIOOS) believes that sustained ocean observing can help save lives and resources of ocean users and decision-makers. PacIOOS relies on partnerships of data providers and users to enhance ocean observations and provide ocean data and information products designed to address the environmental, economic, and public safety needs of stakeholders who call the Pacific Islands home. Based within the School for Ocean and Earth Sciences and Technology at the University of Hawai‘i at Mānoa, PacIOOS is the Pacific Islands regional component of the U.S. Integrated Ocean Observing System (IOOS®).
PacIOOS Six-Day High Sea Level Forecast for Apra Harbor, Guam. The yellow line is the time the forecast was created. The Dark Blue Curve is the observed sea level at Apra Harbor for the previous 3 days. The light Blue Curve indicates the forecast sea level at Apra Harbor for the next 6 days. The forecast is updated every hour. The red line at the top indicates the sea level height that is exceeded by two percent of the observed daily Higher High Waters based on a 19-year historical record (excluding tsunamis). As more information from local residents is provided, the significance of the red line as a benchmark for inundation will become more clearly defined.