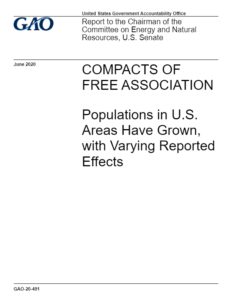 From 2009 to 2018, the number of compact migrants living in U.S. states and territories rose by an estimated 68 percent, from about 56,000 to about 94,000, according to the latest report from the U.S. Government Accountability Office.

Compact migrants have lived in Hawaii, Guam, and the Commonwealth of the Northern Mariana Islands (CNMI). But according to the report, from 2013 to 2018, an estimated 50 percent of compact migrants lived on the U.S. mainland.

As part of the audit, GAO visited Arkansas, the CNMI, Guam, Hawaii, Oregon, and Washington and met with state and territorial officials to identify the effects of providing public education and health care services to compact migrants.

GAO officials found that some area governments use a combination of federal and state or territorial funds to extend health care coverage to compact migrants.

The GAO report also noted other ffects of compact migration in these U.S. states and territories,  including the compact migrants’ budgetary contributions through the payment of taxes and fees.

The report also took note of their workforce contributions—for example, through jobs in hotels, manufacturing, the U.S. military, poultry processing, caregiving, and government.

GAO conducted the performance audit from March 2019 through June 2020

Under the Compact agreement with the Federated States of Micronesia, the Marshall Islands, and Palau, the U.S. provided economic assistance that includes access to certain federal services and programs, among other things, for defined time periods.

The U.S. government also has the responsibility for defense and security matters in, and relating to, each of the FASs, and subsidiary agreements pursuant to the compacts provide for U.S. military use and operating rights in these countries.

Under the compacts, eligible FAS citizens are also exempt from certain visa and labor certification requirements of the Immigration and Nationality Act as amended.

The migration provisions of the compacts allow eligible FAS citizens to enter, live and work in the United States.

Here’s the link to the latest GAO report.