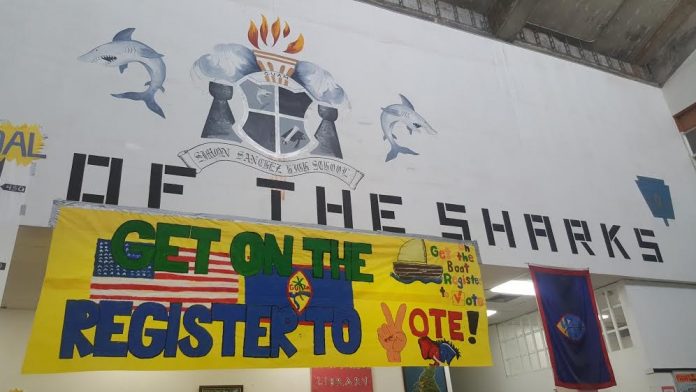 The old campus will be demolished.

Guam – After years of waiting for their dilapidated campus to be renovated, the Simon Sanchez High School community can now look forward to a brand new campus in a couple of years.

In two years, this Simon Sanchez High School campus as we know it, will be demolished and a new Yigo campus will be built.

The Guam Educational Facilities Foundation conducted a walk through of Okkodo High School to see what specs they can apply to the new Simon Sanchez High School.The new Yigo campus will have an auditorium that seats 500, sports facilities, and…
“Sports facilities. You will finally have your own sports facilities, fields to call your own,” says GDOE Superintendent Jon Fernandez.
Part of the negotiation between DOE, Department of Public Works, and the Proposal Guam Education Facilities Foundation is building a new Sanchez next to the old campus. Students will continue to attend school at the old Sanchez until they can move into the new campus. According to DPW Deputy Director Felix Benavente, in that way, classroom instruction and operation at the school will not be interrupted.
Benavente says, “The new SSHS is estimated to cost $76,867,335.”
Since the Request for Proposal only provides $100 million dollars to fix up the GDOE schools, that means that the rest of the schools would only have about $24 million dollars left to share.
Fernandez explains, “There’s going to be one phase of it to look at the immediate safety needs that need to be addressed at the other schools. Those include deteriorated awnings, our restrooms and classrooms.”
This would make the new Simon Sanchez High School the most expensive brand new campus by far.
Benavente says, “We hope that when the details of the plans start to appear, we can start looking at the cost and start negotiating to see if those costs lower so we have more money for the other schools.”
GEFF, who is also responsible for the construction of Okkodo High, Adacao Elementary, Liguan Elementary and Astumbo Middle School, would have two years to build the new Sanchez.
“The contract requires GEFF to construct SSHS within 730 calendar days, that’s about two years. The contract requires GEFF to complete a capital improvement plan within 365 calendar days of award with the negotiating task orders. Task orders will issue for the remaining schools based on priority needs of DOE,” Benavente explains.
That means the Class of 2019 will be the first to benefit from the new campus.
“It’ll be a legacy for all of you. Even if you’re not going to benefit from it directly. You can visit. You’ll know how the school looked like and you’ll know how the school will be like and maybe your younger siblings will have the opportunity to benefit from it and so on. We look forward to a school that would last for many many years,” Fernandez says.