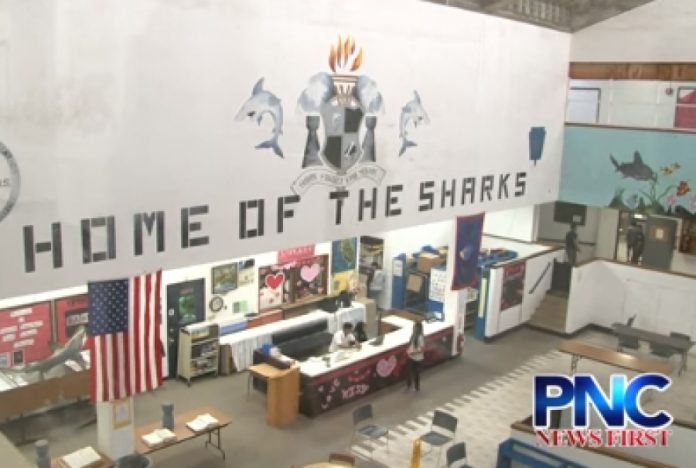 Guam – Sections of Simon Sanchez High School have been cordoned off after a recent health inspection and yet, the construction of a new Yigo campus is at a standstill after Core Tech International has filed an appeal. This means…

GEFF Vice President of Development and Construction Sean Easter says, “The main impact is the school is going to be further delayed, indefinitely, until the procurement protests are resolved.”

Core Tech filed the appeal with the Office of Public Accountability yesterday requesting that if a contract has not been awarded yet, cancel and rebid. However, if a contract was already awarded, terminate and rebid. This follows after the Department of Public Work’s decision to dismiss Core Tech’s protest two weeks ago. According to top offerer Guam Educational Facilities Foundation, this appeal further delays the students, teachers and families of Simon Sanchez High from getting a modern, sanitary and safe school.
Easter explains, “We can’t proceed with buying, designing, hiring because we don’t have our contract yet so what it translates to students, teachers, and people living in Yigo is yet another school year will go by without a new school.”
GEFF Vice President of Development and Construction explains that because of the appeal, GovGuam could be losing out on saving millions of dollars. GEFF’s source of funding will include an interest rate as low as 2.75%, a release states. Unfortunately, Easter explains these opportunities and the low interest rate will not last forever.
“It’s approximately a $23 million dollar saving in interest alone to the government and people of Guam over the life of the project. So for $23 million dollars for example, you can build a new middle school,” he says.
A recent health inspection resulted in sections of the Yigo campus being closed off. In fact, Guam Department of Education Deputy Superintendent Chris Anderson estimates that it would cost the department about $8-thousand to fix issues at the campus. Easter describes the campus as being…”It’s deplorable, it’s scary. I’ve walked through the school several times during various inspections. Quite frankly, I’m scared to death if there’s a fire event at the school, it would end in a very bad tragedy.”
In a release to the media, Easter accuses of making “so much money off the Government and people of Guam and it simply wants more.” The release also asks to compare Core Tech’s deal at Tiyan for old and abandoned buildings and facilities that is worth hundreds of millions of dollars to Core Tech with what GEFF achieved on the recently completed expansion of Okkodo High School and the new Sanchez plan.
Easter says, “In June 15 of last year, this RFP was issued out to the bidders. We are now over one year and we still don’t have a contract. DPW, DOE, and the AG’s Office have worked diligently on this RFP to make sure it’s fully compliant with GovGuam law. We’re anxious to get started. The daily, weekly conditions at Simon Sanchez…it’s really time to put things aside and get to work.”
This is the first appeal Core Tech has filed. Core Tech has filed two protests and were both dismissed. The OPA has about 30-45 days to review Core Tech’s appeal. Until then, construction plans of the new Yigo campus is on hold.