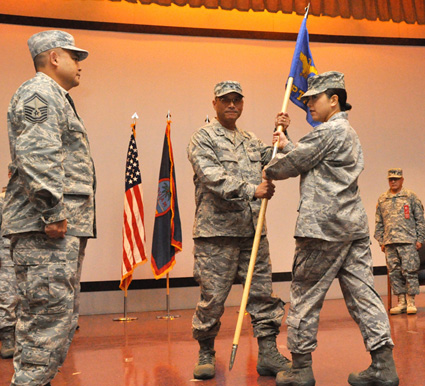 Guam – The Guam Air National Guard celebrated another historical milestone on Saturday October 1 with the official federal recognition of the 254th Comptroller Flight during an activation ceremony.

“It is not often that days like this happen in our organization,” said MAJ GEN Benny M. Paulino, The Adjutant General of the Guam National Guard.  “But it is certainly a pleasure and privilege to be able to commemorate and recognize some firsts for the Guam Air National Guard.”

“In 1982, the 254th Civil Engineering Flight received its federal recognition,” said Lizama.  “At that time a flight, it has now evolved into the 254th Red Horse Squadron over 170 strong.”

The same can be said of the 254th Services Flight, which was activated in 1989 and evolved into the 254th Force Support Squadron with over 80 assigned personnel about two years ago.

And in an even greater capacity, Reyes now proudly dons the title of the first female commander of a unit in the Guam Air National Guard’s 30-year history.

She charges ahead in her new role with a clear vision of the responsibilities and expectations in store.

“Thank you for the selection to this position,” said Reyes as she addressed fellow leaders and Airmen. “Know that you inherited a dedicated leader and follower who takes ownership in every aspect of this flight and will teach this to her subordinates.”

The 254th Comptroller Flight is composed of 10 personnel, half of whom have already gained valuable deployment experience in their designated field.  Together they put into practice fiscal responsibility in servicing over 450 assigned members of the Guam Air National Guard.