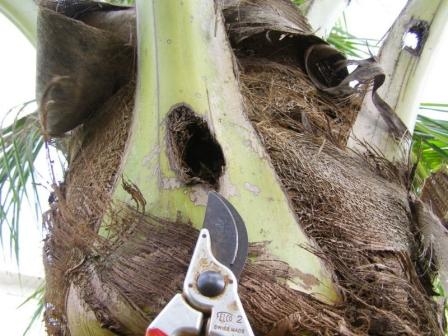 The spores found in coconut trees are injuries caused by the coconut rhinoceros beetle.

Guam – In a new study released by the University of Guam’s coconut rhinoceros beetle (CRB) research team, the rhino beetles that took root in Guam’s coconut trees are continuing to show signs of resilience to their attempts at eradication.

According to Aubrey Moore, an entomologist and associate professor at UOG, the virus called Orycted Nudivrs which was used to kill the beetles, has proven to be ineffective at halting the spread of the beetle population.

Initially discovered on Guam in 2007, the outbreak of rhino beetles has since spurred action from researchers at New Zealand’s agricultural industry, the Philippine Coconut Authority, and the Guam Coconut Rhinoceros Beetle Eradication Project. Many attempts have been used to rid the island of the beetles, including pesticides, traps, and sanitation procedures, but most were unsuccessful. Guam researchers state that insecticides may be used to combat the beetles, but they may be too costly, and they are not approved for consumer use.

The UOG research team has not noticed any significant change in the number of beetles found on coconut trees, despite further attempts at sanitizing the areas of the tree where the beetles feed on the sap and favor decaying parts. The discovery, however, on failed eradication attempts has led to sanitation measures in which trees will be cleaned of their grub and dead matter, which lowers the chance of breeding.