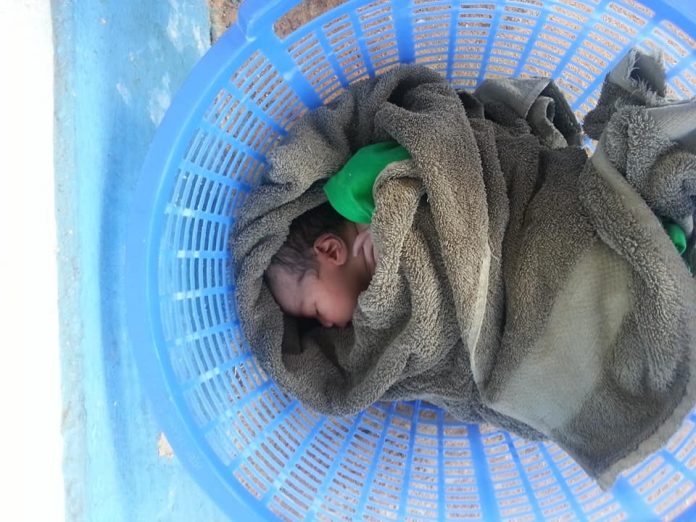 Guam – A newborn baby was abandoned on the doorsteps of a stranger’s home this morning with its umbilical cord still attached.

It was around 8:30 this morning. David Nguyen, who has Parkinson’s disease and needs assistance to walk, was sitting in his living room going about like a normal day. Except it wasn’t a normal day at all.

“First I hear [a thud]. I look in the window there,” explained David Nguyen, pointing in the direction of his south facing window. “I heard people outside there. I think it’s my daughter cleaning or something.”

Because of mobility issues, David could not get very far from his sofa, so he called his wife in the next room who stepped outside and found the baby.

“My wife said maybe somebody put baby outside. I said call my daughter,” he recalls.

David said he only caught a glimpse of the woman through his window, but indicated she might be local with dark-colored hair and appeared to be in her mid-30s. As he attempted to get a clearer picture of the woman, she walked off his front lawn and disappeared into the day.

David then contacted his daughter, Trang Nguyen, who lives four doors down, telling her that a baby was left in front of his home. She walked over thinking it was a lost child from the neighborhood, perhaps a toddler. She never thought it would be a newborn baby, let alone one who seemed to be just a few hours old.

“We tried to open a little, as much without, we were worried about hurting the baby. I saw dried blood around him in the bottom part. The medic, when they opened it up, they saw, according to them, a part of the umbilical cord still attached,” explains Trang, adding that the child was double wrapped in a t-shirt and towel and placed inside a laundry basket.

Speaking in Vietnamese, David said he’s just glad that the baby is now safe and that he was nearby when the newborn was left by his window as things could have turned out worse if no one was there to protect the child from the elements like rain or heat.

Meanwhile Child Protective Services Supervisor Maefe Muyco says in addition to the Guam Fire Department and Guam Police Department CPS was also called out to the scene to assess the situation.

“Our crisis worker went out there, assessed the baby. We’re getting the baby all the medical needs this child needs and then some to ensure that this child’s health is all taken care of and and he is safe,” said Muyco.

The child was taken to GRMC and, according to Muyco, is now safe in CPS’s care.

Guam Police are asking for the community’s help in identifying the parents of the child. Anyone who may have information about this case is asked to contact GPD at 472-8911 or 477-HELP.