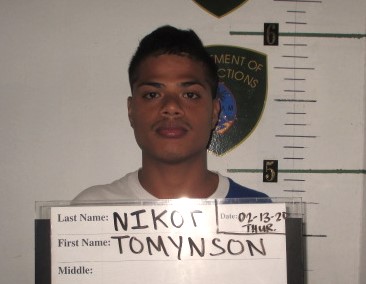 Guam police have arrested a 21-year-old man who is accused of throwing a knife through the open window of a moving vehicle, injuring a female passenger inside.

19-year-old Aaron Jamnila was driving towards the Sinajana Payless. His girlfriend, 18-year-old Kiara Pangelinan, was sitting next to him in the passenger seat.

Aaron’s mother, Angelica Gumataotao, told PNC Monday that her son had just passed the priory when he came upon two young men, one on the side of the road and the other standing in the middle of the street.

She says her son slowed down as he approached. Then, the teen in the middle of the road, threw a knife through the driver’s side window.

The 10-inch blade hit Kiara in the head causing a wound that needed to be stapled shut at Naval Hospital.

According to GPD spokesman Sgt. Paul Tapao, the arrest was made thanks to the work of a newly formed police task force whose officers interviewed witnesses. They were also able to obtain surveillance video from surrounding homes.

Sgt. Tapao said that the arrest was made based on supplemental information obtained by the task force. The victim later identified her attacker in a photo lineup.

READ the statement from Sgt. Tapao in FULL below:

On Sunday February 9, the Guam Police Department entertained an Aggravated Assault complaint that occurred on the roadway of Pale Kieran Hickey Drive, in Sinajana.

Preliminary police reports suggest that a female victim was struck by a knife, that was thrown at her vehicle while traveling in Pale Kieran Hickey Drive.

The victim was later transported to Naval Hospital Guam for treatment and care. This case was assumed by the newly formed Task Force in which a follow up was conducted.

Through the course of the follow up investigation, Task Force Officers interviewed possible witnesses and obtained video surveillance from surrounding residence, which enabled the agents to identify a person’s of Interest relative to this case.

Tomynson Nikot was booked and confined at the Department of Corrections. This case has been forwarded to the Office of the Attorney General for prosecution.
###