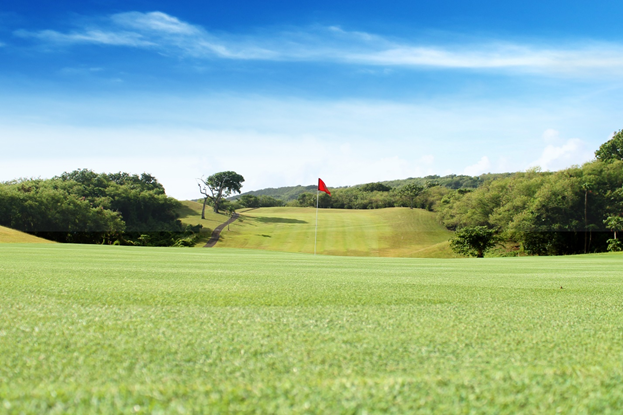 The management team of the Country Club of the Pacific (CCP) recently announced that the picturesque 13th green has been completely renovated and is open for play.

Primary to the improved playability of the new green is the installation of Trinity Zoysia turf. CCP is the first course in the Asia Pacific Region to install the highly durable turf. Trinity Zoysia is a drought-tolerant grass that provides playability to the highest levels with sustainable attributes of low water and fertilizer. Golfers will enjoy its lush and smooth texture, making the green’s condition perfect for play by all skill levels.

Ben Ferguson, General Manager of Pacific Islands Club Guam, which oversees the management of CCP said, “The Trinity Zoysia green is revolutionary and will increase playability of the course. We are excited to announce this development for Guam’s golf community and our visitors.”

The renovation of the 13th green is the first on an aggressive list of ongoing improvements at the Yona property. Other planned developments include renovation of other greens and tee boxes, reconditioning of bunkers and improved upkeep of the course’s aesthetics, including improved views and vistas.

Ferguson went on to say, “CCP is a beautiful property with incredible views. We’ve undergone some substantial upkeep of the property to open up the views of the ocean throughout the course. Feedback from our regular players and first-time visitors has been positive.”

Activity has picked up at the course and is expected to continue as several charitable tournaments have returned to CCP. Guam National Golf Federation President Richard Sablan noted, “The improvements at CCP are substantial. CCP is full of history and nostalgia, and it’s a great place to play.”

“We invite our island’s golfers to come out and see the improvements for themselves. They’ll like the changes we’ve made to a course that has been a longtime favorite,” Ferguson added.

CCP is open from7:00am to 6:00pm. For more information or to make reservations, visit ccp-guam.com or call 671-789-1361. Ask about resident rates and special visitor packages.

About Country Club of the Pacific CCP is an 18-hole championship golf course on the southern end of Guam managed by Pacific Islands Club. For the last 47 years, CCP has welcomed golfers from the island and around the world and has hosted Guam’s most notable tournaments. Beginning in 2019, the course has been undergoing upgrades and improvements to maximize its breathtaking view of the ocean. Visit CCP online at CCP-guam.com to learn more or to make a reservation.

Information Provided by a News Release